Edit Oderbolz - Behind the Lid 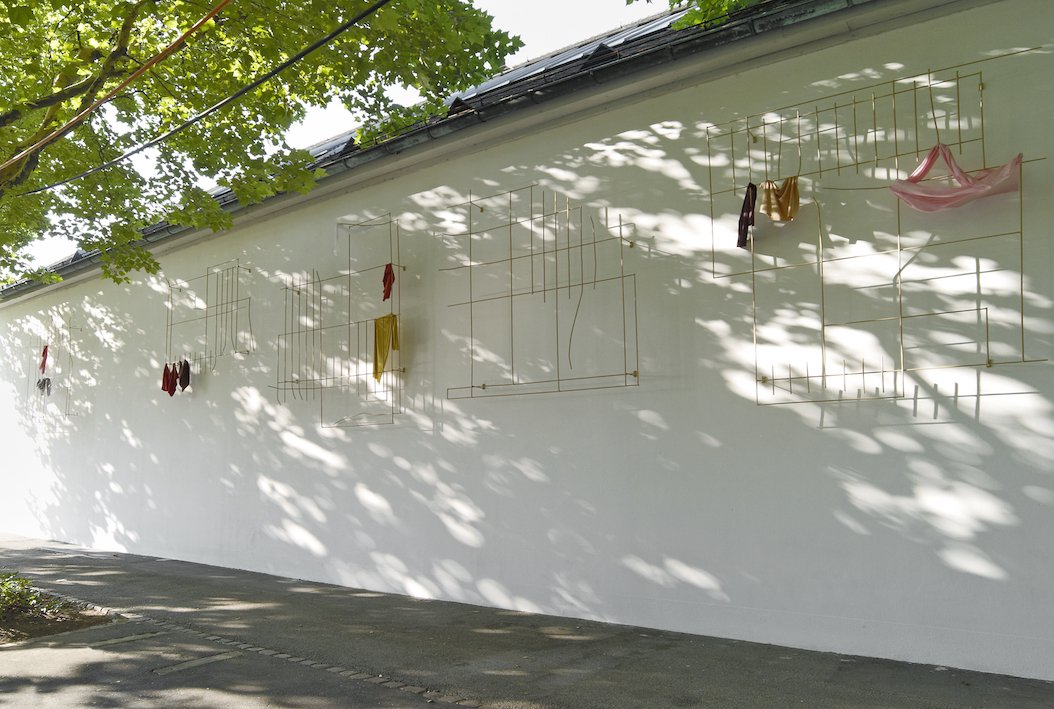 SCULPTURE AT is delighted to announce the sixth sculpture commission by established Swiss artist Edit Oderbolz.

Oderbolz has developed a new work for Bermondsey Square’s temporary public sculpture commission SCULPTURE AT. The work draws from the various uses the square has during the week: as a place of transit; a place where residents and people working in the area sit; and as the site of a weekly antiques market. Considering these uses and our basic human need of protection from the environment, Oderbolz builds a sculpture in the form of a house.

It is an archetypical house, a very rough form like a kids drawing, and the sculpture mingles between a 3-dimensional form and a drawing. On top of this form, one half of its roof is covered by a solid metal shelter and the other side a soft curtain hangs, creating a more intimate and private aspect. With these two elements, a situation is created that raises questions around our expectations of a shelter or house in our urban environment.

Exploring relationships between: privacy and the public; cover and protection; shelter and safety; internal and external; Oderbolz’s sculpture is a minimal gesture, stripped down to the bare relevant elements. Almost brutally, it leaves space to the imagination and interpretation of the passing viewer or ‘shelterer’.

Oderbolz says about the project: “Dealing with architectural space is a core element of my artistic practice. I investigate, what mental (emotional) and physical effects the social construction of space has on us. What influence do private and public spaces have, where are the intersections and how does society deal with them? A citation from the architect and cultural theorist Bernard Rudofsky builds a starting point, among others, for my intervention on Bermondsey Square. He describes the space created by folding a newspaper in two as the beginning of architecture: “Suburban man falling asleep near his lawnmower, pulling a section of his Sunday newspaper over his head, thus re-enacts the birth of architecture“. This simple gesture of folding a newspaper for a makeshift roof to protect from the sun or an unexpected shower of rain, will be part of my installation.”

Edit Oderbolz (b.1966, Switzerland) is known in the contemporary art context above all with the awarding of the Manor Art Prize, Basel (2004), solo exhibitions at Kunsthaus Basalland (2016) and Kunsthaus Langenthal (2008), the project for the public wall of Kunsthalle Basel (2010) and her presentation at Statements, Art Basel (2010). In her sculptures, spatial drawings and objects, Oderbolz reflects on how architectures and their inhabited structures are always part of a larger political and economic context. While utopias and powerful rhetoric can express and reveal themselves through architecture, it is only in everyday life and the lived experience that boundaries and spaces between the self and the other, between the individual and the community, can be defined and thus become tangible.