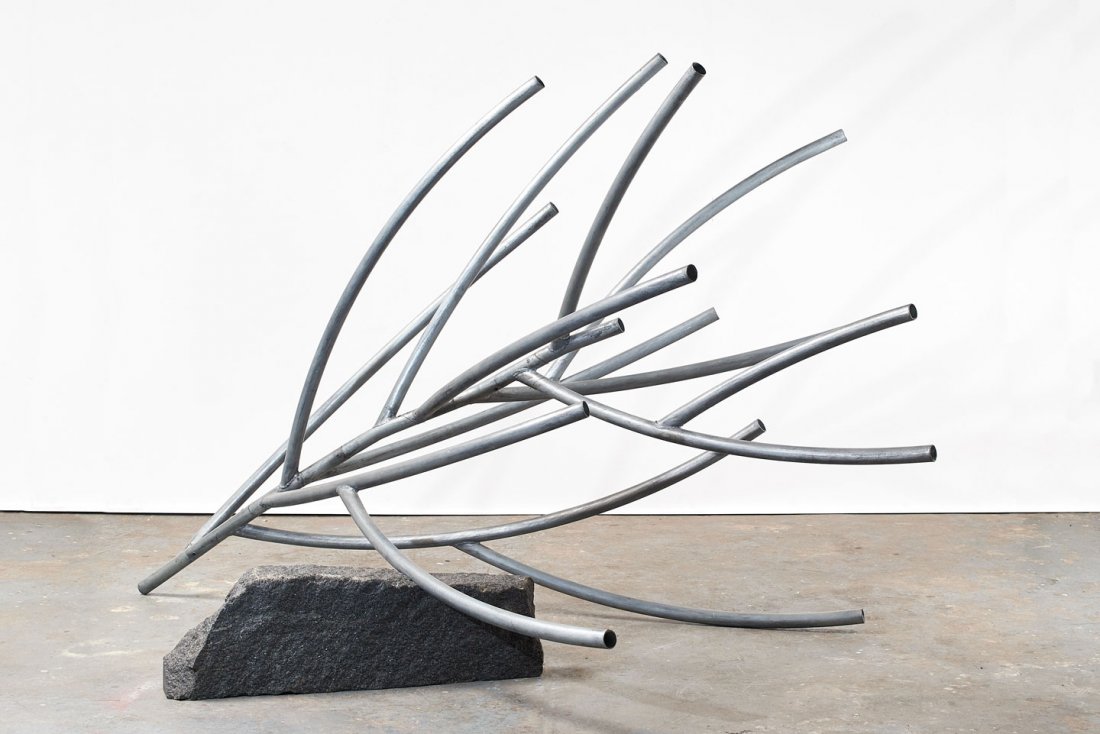 Tyburn Gallery is pleased to present Dissolution, a solo exhibition by Michele Mathison. Informed by his own migratory experience living primarily in South Africa and Zimbabwe, Mathison’s sculptures and installations form a visual language commenting on both the personal and political. His practice involves industrial processes and materials which highlight themes of labour and economic inequality.

For this exhibition, Mathison has taken inspiration from the monumental mine dumps which surround Johannesburg. These towering mounds of earth left over from ore extraction, remnants of the 1880s gold rush that created the city itself, loom beside highways and disrupt the grid of commercial streets. Some are pristine mastabas, while others are dull dunes, part-collapsed and overgrown with hardy vegetation. These wastelands are now being mined anew, re-processed with modern technology by mining companies to squeeze out the last amounts of wealth. On the other end of the economic scale, informal miners, often illegal immigrants from Zimbabwe, tunnel and dig around the outskirts, searching for more of the gold left behind and any other valuable metals they can find to eke out an existence. This economic disparity contains many of the tensions that persist in Southern Africa between capital and labour, and points to the continued contestation over who owns the mineral wealth beneath the soil and who should benefit from it.

Dissolutionfeatures a range of works that incorporate the remnants of these mining activities. Wall-mounted relief panels that reconstruct the ground from these landscapes combine with steel sculptures that echo the surrounding vegetation and broken infrastructure. Like Borges’ map that grew to the size of the territory itself, these extractions from the landscape can be seen simultaneously as one-to-one depictions or aerial views of the same ground. There are echoes of an archaeological or forensic approach to laying a grid on the landscape, recording and focusing in on a square at a time to see what is revealed in it.

Mathison works his reliefs by recycling the discarded aggregate, eroding away lighter material in a manner that mimics both the manufactured processes of extraction and the natural weathering of the landscape. In addition to the human activities that rapidly shape rock and soil are the forces of nature, of wind and water, playing out over longer periods of time. He plays on this ambiguity in both the panels and in the sculptures that accompany them: tree branches, grasses and futurist compositions made from industrial metal bar and tube.

Michele Mathison was born in 1977 in Johannesburg, South Africa and currently lives and works between Zimbabwe and South Africa. He graduated with a Bachelor of Arts in Fine Art Honors, Michaelis School of Fine Art, University of Cape Town, South Africa in 2000.