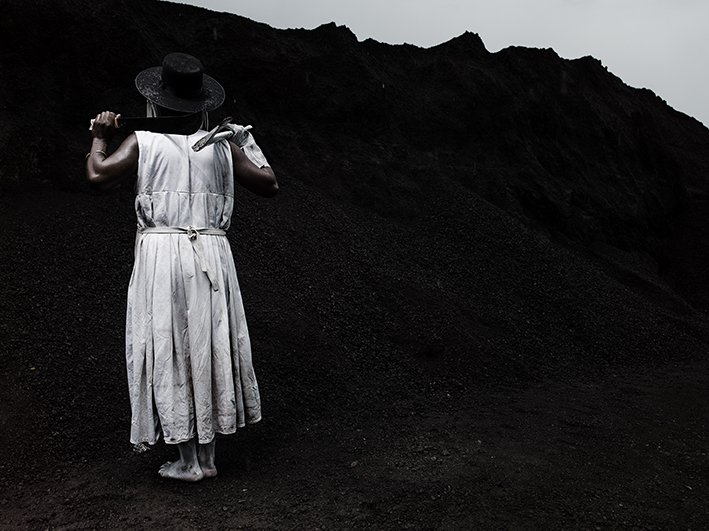 Tyburn Gallery is pleased to present an exhibition of new works by Mohau Modisakeng.

Modisakeng is one of the most promising young South African artists today. His practice reflects both upon the political and his own personal experiences of growing up in Apartheid and Post-Apartheid South Africa, with central themes which revolve around violence, labour, security and ritual.

Originally trained in sculpture, Modisakeng uses the technique of the self-portrait – through large-scale photographs, performance and video installations - to address issues such as his own identity and the political processes within his country. The artist uses his body to explore the influence of South Africa’s violent history, creating powerful and poetic invocations where the body is transformed into a poignant marker of collective history. Modisakeng explains: “The real work for me is in relating the visual signs and symbols of the abstract – be it in music or in my dreams – into a narrative that resonates with the collective social experience.”

The exhibition’s title Bophirima is from the artist’s mother tongue Setswana, meaning West or the direction from where the sun sets, also meaning twilight or before dusk. In two new series of photographic self-portraits, Endabeni and Ga Etsho, and in the film To Move Mountains Modisakeng reflects on the legacy of colonialism and its effect on post-independence societies in Africa. The social, political and economic systems inherited from colonial rule have remained entrenched, with the result that the lives of most of the population, other than those of the new elites, have not changed markedly.  Economic resources continue to be in control of a small minority, with the overwhelming majority of people struggling to make a living in a climate in which the odds remain stacked against them.

In South Africa, Apartheid has left an ongoing legacy of political corruption which has hampered efforts to address historical injustices. Levels of economic inequality remain among the worst in the world, a situation which has worsened in the face of mass unemployment and poor economic growth. Widespread poverty and the failure to redress the injustices of the past have contributed to an environment in which anxiety, unrest and conflict predominate. The ethnic, political and social tensions caused by centuries of colonial rule are being exploited by competing political forces seeking to gain or maintain access to the mostly exploitative profits resulting from a growing global appetite for African commodities.

Bophirima will be the first solo exhibition of Mohau Modisakeng in the UK.

Mohau Modisakeng was born in Soweto, Johannesburg in 1986 and lives and works between Johannesburg and Cape Town.  He studied at Michaelis School of Fine Art, Cape Town.

He has contributed to the group exhibition of the South African pavilion at the 56th Venice Biennale (2015). His works form part of large public collections, such as the Johannesburg Art Gallery, the Iziko South African National Gallery, Cape Town, the Saatchi Gallery and the Zeitz Museum of Contemporary Art Africa (Zeitz MOCAA).