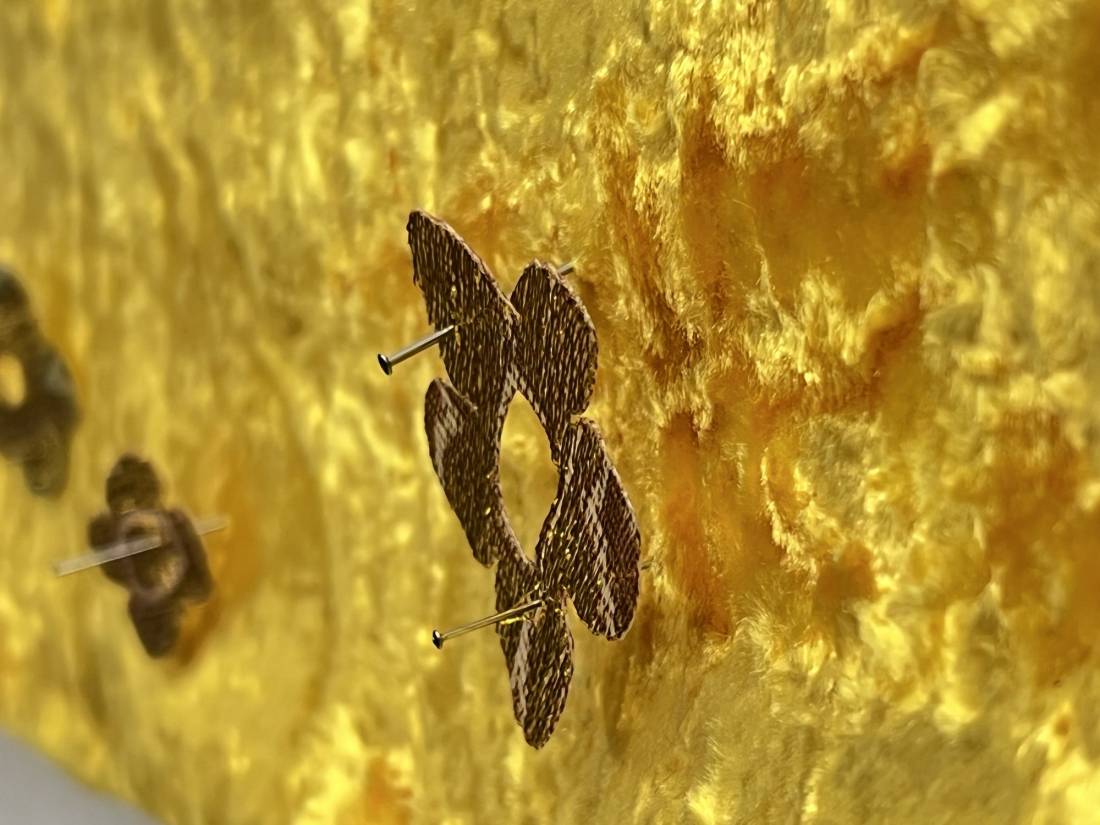 Öliara is a new site-specific installation created for Mimosa House by Gulnur Mukazhanova. Over the last two years, the artist, like many people, has been in a state of mourning. She lost a family member to the virus that engulfed and traumatised the world, while her emotional state was further shattered by the nationwide massive unrest that took place in her home country, Kazakhstan, in January 2022.

Translated from Kazakh, Öliara describes the moment within the last lunar phase termed the ‘dark moon’ which lasts between two and three days. In the midpoint of this period, the new moon is born. As the moon is hardly noticeable during this time, Kazakhs used to associate this moonless sky with a dead moment; a time when evil is set free, and everyone must remain inside their houses to be safe. This word has been used by many Kazakh writers as a metaphor for the hardest and darkest periods in history, such as Tolen Abdikov in his historical novel, Öliara, from 1985.

In Öliara, Mukazhanova reflects on the protests of Qandy qañtar (Bloody January), although she also looks back into the history of the Soviet Union period, the cultural trauma that wounded both its contemporary and succeeding generations, and their consequential loss of identity. While working with this history, she also reflects on the present moment and current politics.

Within Mimosa House, the artist constructs a horizon line using cut-out fragments of fabrics which are layered and pinned on top of each other. As Mukazhanova highlights: “it is not the horizon of the future, rather it is the reflection of the current period”. The fact that the artist does not permanently attach the fragments of fabric with glue or thread when she interlinks them, but pierces them with pins, intensifies its state of fragility and impermanence. Mukazhanova used to acquire these fabrics from bazars (markets) in Kazakhstan that are overflooded with the cheap synthetic Chinese fabrics that imitate the noble organic silks that had been traded on the silk road.

While the horizon occupies the walls, the floor of the main room is covered with white fabric, acting as a shroud that covers a body. This shroud will serve as a surface that captures the moment of presence, marking the footprints of those who visited. On top of this white surface there are mounds of soil. In Christianity and many other religions, life was created from clay and clay is soil. In the pre-Islamic period of Tengiism, nomads believed in the earth-mother goddess, Umai. Mother Earth gives birth, feeds humanity, but also takes the bodies back once the spirit has left. Öliara’s materiality recalls these ephemeral connections between the body and earth. One can see the contours of flowers, cut from the ornamental designs of the fabrics, pinned to the soil. Mukazhanova cuts out the internal part of the flower, perhaps symbolising loss, while leaving the contours or the traces of being.

Within Öliara, the artist creates a space for mourning. The horizon, like a landscape of her homeland, becomes a landscape imbued with many layers of memory, where one fragment is disguised under the other. In this pertinent installation, Mukazhanova thinks about the transience of being and the fragility of life and the body.

Ainalaiyn Space is a nomadic arts project based in London, founded by Indira Dyussebayeva – Ziyabek. We work with international artists and curators, providing an equal opportunity for everyone, especially to those that do not have a major presence in Europe. With learning, research and experimentation at the centre of our practice, we work on a diverse range of projects which showcase contemporary art from an interdisciplinary perspective, covering science, architecture, literature, philosophy and other areas.

Gulnur Mukazhanova is an artist who uses the materials of traditional Kazakh handicrafts to explore the complexities of post-nomadic identities, cultural alienation, and the effects of globalisation. Born shortly before the collapse of the USSR, she was raised in the volatility of the newly formed Kazakhstan. She completed her studies at the Art Academy in Almaty and the Kunsthochschule in Berlin Weißensee. Working in felt, the textile recalls and connects to the origins, traditions and customs of her native country. The artist also works with mass-produced synthetic fabrics that imitate organic silks and were originally acquired from Kazakh bazars. She creates vivid installations that are precariously secured with pins, raising questions of impermanence, fragility and uncertainty. Being based in Berlin for over 10 years helped Mukazhanova to understand and critically analyse not only the situation in her home country and the Central Asian region, but now she is able to reflect through her art on global issues that are common for everyone.