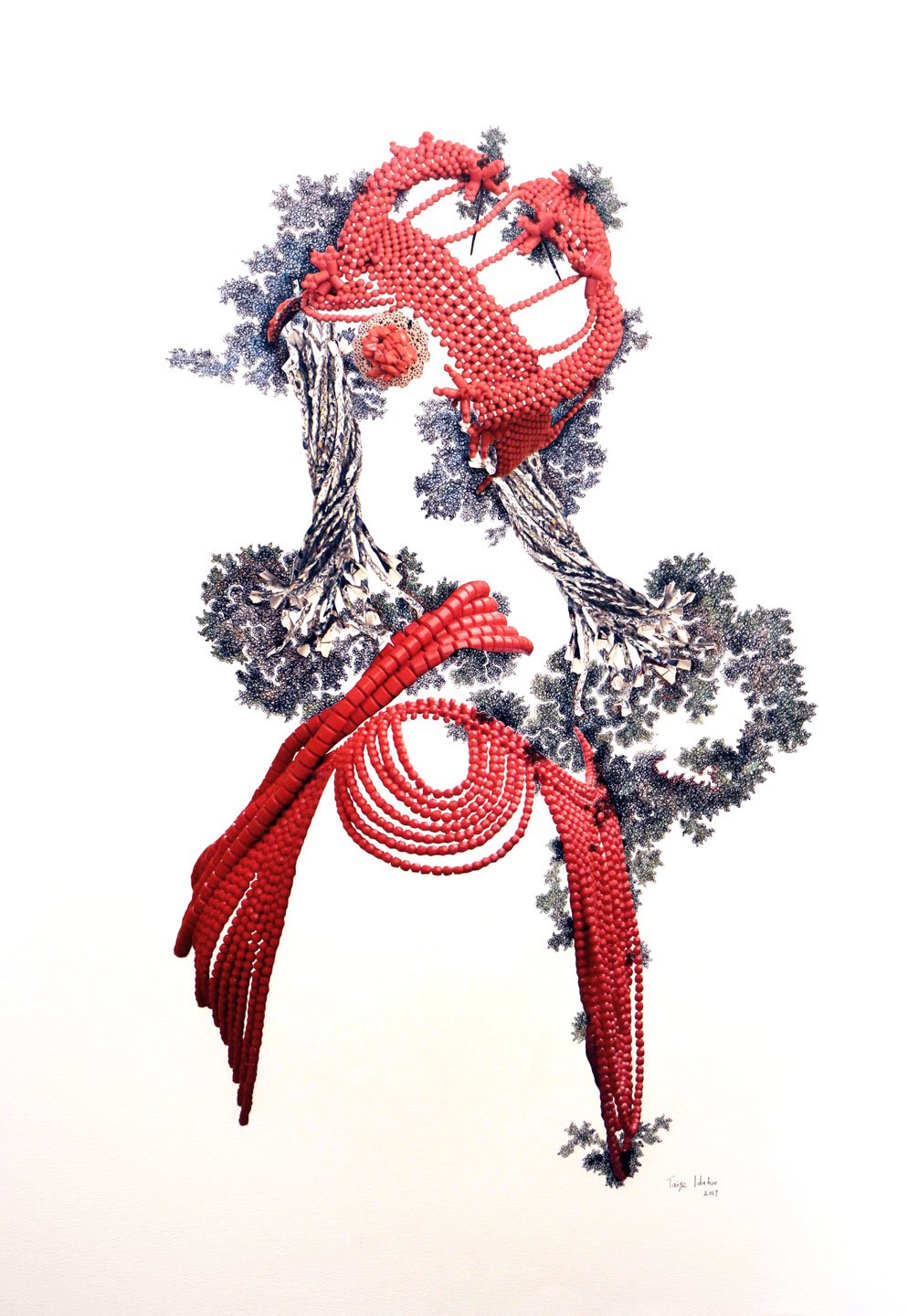 Tyburn Gallery is pleased to present Òkhùo, a solo exhibition by Taiye Idahor. Born and based in Lagos, Nigeria, Idahor traces her heritage to the ancient empire of Benin City, whose history and iconography she references in her practice. Working within media as diverse as sculpture, collage, drawing, and installation, she explores layers of themes which are simultaneously universal and intimate, expressing female and African identity within the broader contexts of history, tradition and globalisation.

The title of the exhibition, Òkhùo, translates to ‘Woman’ in the Bini language of Benin City. In this body of work, Idahor presents a reflection on women and power through the iconic figure of the Iyoba, mother of the king of Benin City. The position of Iyoba was first introduced in the 16th century by Oba Esigie in order to honour his mother, Queen Idia, for her strength and support, and it remains a title of high rank within the Bini royal hierarchy. Like the king and high-ranking chiefs, the Iyoba’s traditional regalia involves an elaborate ensemble of coral beads. Ivie, the name of the series presented in the exhibition, can be translated as ‘beads’ or ‘beauty’. These beads have become a symbolic representation of women’s authority and influence, and yet their aesthetic is casually evoked by many modern brides in Nigeria, often using inexpensive plastic beads instead of real coral. The practices of imitation and mass-production raise important questions about the authenticity of the power and respect accorded to women today.

The works presented in the show highlight the voids created by the absence of women in genuine positions of power, and the uncertainty felt by women who must define themselves among all of the conflicting expectations, demands, and disempowering realities of society. Removing the bodies of brides that carry the beads, Idahor leaves these adornments to float in space, lost, wandering, without anything to anchor them. What emerges are questions about how women occupy the positions accorded to them, and whether it is possible to pull together various roles of marriage, family, motherhood, and business, against an increasingly complex backdrop of traditional, religious expectations commingling with the expectations of 21st century life. In this changing environment, is it possible for the modern woman to anchor herself in a way that gives her real authority over her own identity? What does it mean to be a modern woman? And might it be better to look back to the powerful women of Bini history for guidance, rather than looking to Eurocentric examples of female empowerment? Òkhùo is a call for women to begin seeing the title of “woman” as powerful in itself, to reclaim the respect that this position entitles them to, and to boldly occupy their place of authority in the world.

Taiye Idahor was born in 1984 in Lagos, Nigeria, where she currently lives and works.

In 2007, she graduated from Yaba College of Technology in Lagos with a Higher National Diploma in Fine Arts, specialising in sculpture.

The artist presented her first solo exhibition, Hairvolution, in 2014 at the Whitespace Gallery in Lagos, Nigeria.

Her work is included in the collection of the Zeitz Museum of Contemporary Art Africa, Cape Town, South Africa.