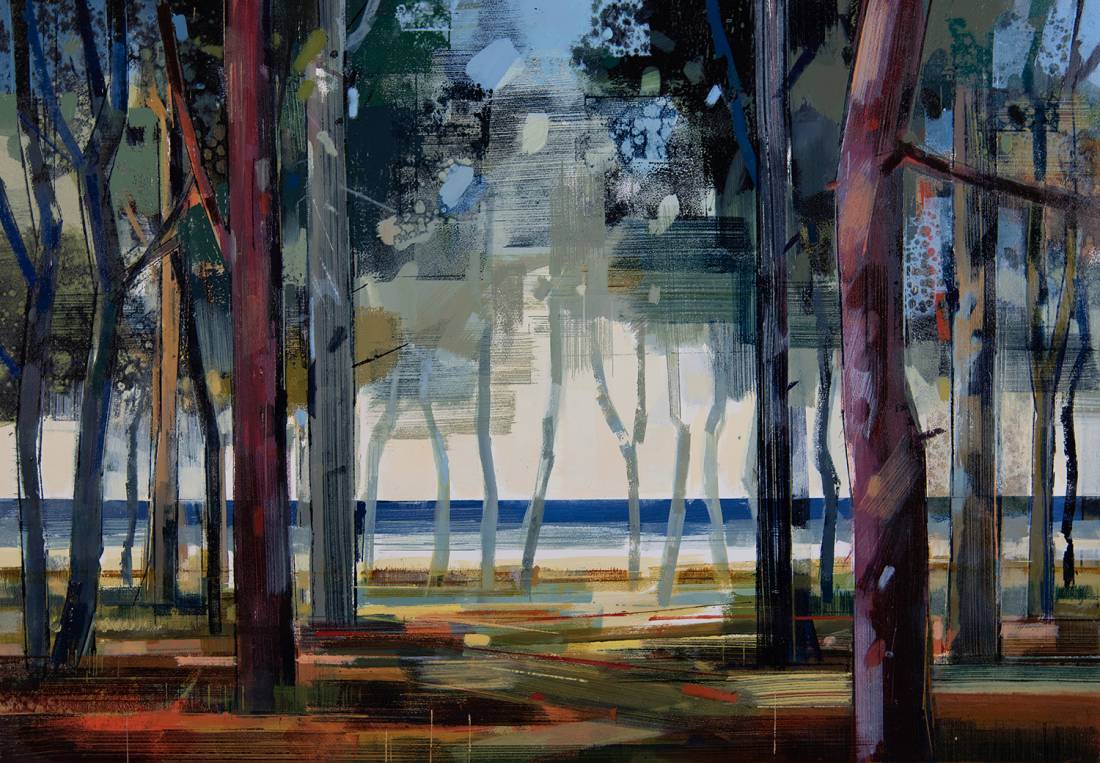 Jane Human is a British painter and printmaker living and working in rural East Anglia. At its heart, Jane's work is inspired by her love of open space and the seemingly inconsequential landscapes around her, made intriguing by her closely observed studies of shifting colour and light, rhythm and texture. In the studio these notes and ideas crystallise to create a powerful sense of place within her paintings. Jane constantly explores the rich territory at the edges and overlap of abstraction and representation. Her bold mark making is enhanced by her unique working process which utilises a two tonne 1940's offset press by which she builds countless fine layers of painted and
mono-printed marks; each work will be in progress for many weeks as the image slowly resolves to create a textural richness and luminous colour.

Collected internationally, Jane's work is also held by public and corporate organisations in the UK and has been selected for many prestigious national exhibitions including the Royal Academy Summer Exhibition and The Royal Society of British Artists, National Open Art, and Originals National Print exhibition. Commissions have included work for film, murals and backdrops for clients including Channel 4/Greenpoint films, The Royal Mail, Cunard, Dulux, The World of Interiors Magazine.

Barry Stedman (b.1965, Watford) is a ceramic artist whose colourful, dynamic forms come out of a deep connection to the landscape. All the work, developed in series, is rooted in the directness and urgency of drawing outside; responding to the weather, drama and life which surrounds his garden studio by the river Flit in Bedfordshire. Starting on the wheel or constructed in slabs, the earthenware vessels are cut open and altered, scored and handled, before being glazed with layers of oxide, slip and washes of vivid colour. The vessels are then offered to the kiln, sometimes in multiple firings, in an open dialogue of transformation; infused with the marks, rhythm and energy of their making.

Stedman came to ceramics after a career in retail when he was seduced by the possibilities of clay to express abstract ideas of colour and form. He completed a Ceramics degree at the University of Westminster in 2009 where he received the Caparo Award, joining Edmund de Waal's studio that same year. His work has been featured in numerous exhibitions and galleries across the UK and internationally.

Jane Adam was born in London. Following a short career in retail management at Heal's and Liberty's, she gained a degree in 3D Design at Manchester Polytechnic in 1981 and an MA in Metalwork and Jewellery at the Royal College of Art.

After graduating in 1985, she set up her studio in central London. Since then, Jane has concentrated full time on making jewellery, combining artistic integrity, ongoing experimentation and technical innovation with a grounded sense of practical reality, to design and create ranges of jewellery that appeal to women (and men) of all ages. Her innovative work in anodised aluminium has been widely influential, and her jewellery is included in many major museum and public collections.