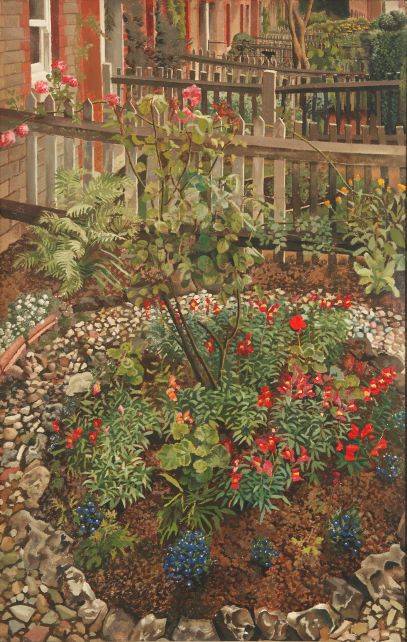 Stanley Spencer Gallery are delighted to present Delight in Nature: Stanley Spencer’s World, opening on 30th of March. The new exhibition will chart the influence the natural world had on Spencer’s development as an artist, from his very early years to the end of his life. Beginning with his tentative drawings done as a boy, the exhibition looks at how landscape and the natural world became an integral part of Spencer’s artistic practice. Later in life, when he was going through a troubled divorce, he complained that his landscapes and still-lifes were mere ‘pot boilers’ (easily saleable works that helped him survive financially). This exhibition reveals however, that his study of nature was not only a meditative tonic, but also informed his figurative work, becoming an intrinsic part of his visionary narratives.

Most of the works on display centre around the village of Cookham, Spencer’s home, which was at the core of his artistic and spiritual inspiration (although works from Northern Ireland, Macedonia and Glasgow also feature). These works came to play an important part in his artistic narrative and expressions of Cookham as an earthly paradise. The exhibition will explore themes that elevate Spencer’s work beyond the mere representational: his love of dirt or the discarded; the use of boundaries to suggest other metaphysical worlds; the conflict between the sacred and the profane; as well as the notion of redemption through nature and place.

The title is taken from a review of Spencer’s work in The Scotsman, which compared him with the Pre-Raphaelites, who had ‘the same prodigious delight in all the facts of nature for their own sake. He loves to paint nettles and grasses leaf by leaf, blade by blade, as they did. He loves it all too much to leave anything out.’
The exhibition will include works from the Gallery’s own collection as well as some stellar loans, including The Dustbin (The Royal Academy of Arts),  Bluebells, Cornflowers and Rhododendrons (British Council Collections),  Magnolias, The Cultivator, and Cookham Rise: Cottages (all from private collections).
The exhibition’s curator, Amanda Bradley said: ‘This exhibition demonstrates how the natural world and the everyday were unified with Spencer’s spiritual vision: how rubbish became something beautiful; suburban spaces were considered places for mysterious, heavenly happenings; and how the sacred co-existed with the profane. Spencer’s paintings of the natural world were not just a financial necessity, but were a form of personal redemption.’

About Stanley Spencer
Sir Stanley Spencer, CBE RA (30 June 1891 – 14 December 1959) attended the Slade School of Art, and is well known for his paintings depicting Biblical scenes occurring in Cookham, the small village beside the River Thames, as well as his large paintings for the Sandham Memorial Chapel and the Shipbuilding on the Clyde series. Spencer’s works often express his fervent if unconventional Christian faith. This is especially evident in the scenes that he based in Cookham. Spencer’s works originally provoked great shock and controversy. Nowadays, they still seem stylistic and experimental, while the nude works foreshadow some of the much later works of Lucian Freud.

Stanley Spencer Gallery
The Stanley Spencer Gallery is located in Cookham, Berkshire, and is dedicated to the life and work of Sir Stanley Spencer. Opened in 1962, it is housed within a former Wesleyan Chapel in the High Street, a few minutes’ walk from the house where Spencer was born and where he used to worship. The gallery’s collection comprises over 100 paintings and drawings, and these are exhibited on a regular basis at the gallery, alongside loans from other public and private collections.
On the mezzanine floor level of the gallery is a small study area which houses library and archive material and a computer presentation about the artist and his work. A comprehensive selection of books and articles on Stanley Spencer and related topics is available to be consulted on the premises during opening hours.
The Gallery has won a series of accolades, including its naming as one of the five most ‘unmissable’ small Art Galleries in the UK and the award of a Michelin star in the Great Britain Michelin Green Guide 2014. The Gallery received the Queen’s Award for Voluntary Service in 2016.
Exhibitions have included The Art of Shipbuilding on the Clyde (2011), Stanley Spencer in Cookham (2013 - 2014), Spencer in the Aftermath of the First World War (2014), Paradise Regained (2014), The Creative Genius of Stanley Spencer (2015), Patron Saints: Collecting Stanley Spencer (2018), Friends and Family: Portraits by Stanley (2018- 2019), Counterpoint: Stanley Spencer and his Contemporaries (2019), Love, Art, Loss: The Wives of Stanley Spencer (2020-2021) and Mind and Mortality: Stanley Spencer’s Final Portraits (2021-2022).