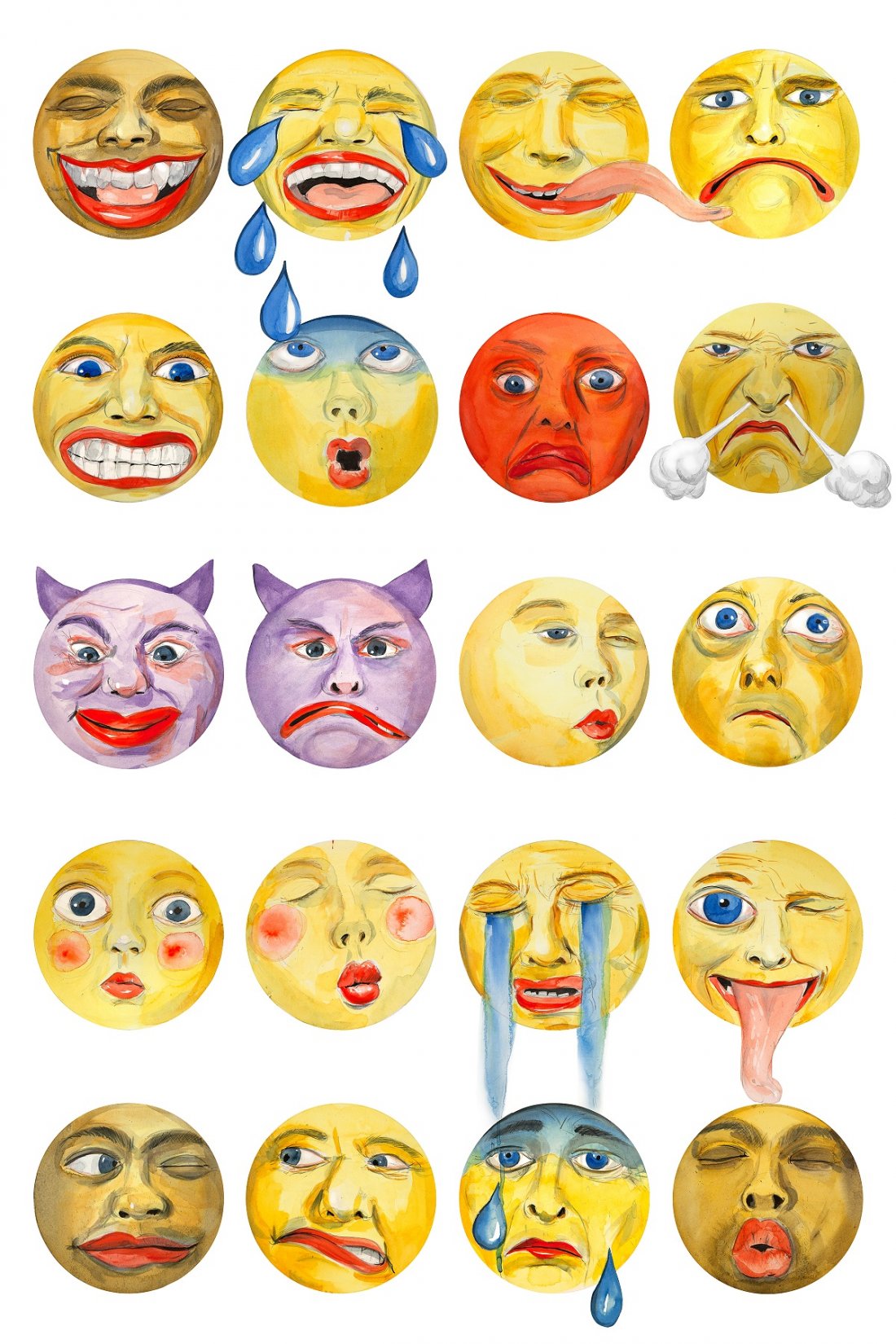 Emotions Go to Work’ is an interactive installation by New York based artist and filmmaker Zoe Beloff. It investigates how technology is used to turn our feelings into valuable assets.

Ever since the 19th century, people have been collecting scientific data from the human body and cataloguing emotions. Today, smart devices try to gain our trust in order to compile information. We create machines in our image, shaped to serve our desires – and in turn they reshape us.

Beloff explores where this evolution is taking society. Can these technological systems understand our feelings? Will emojis determine our emotional life? As technology takes on more and more emotional characteristics, how will they change the nature of our desires?

On tour from Museum Dr Guislain in Belgium – an organisation dedicated to the history of psychiatry – ‘Emotions Go to Work’ presents itself as a cacophony of faces (human and nonhuman) which are either animated, illustrated or performed, alongside a series of symbols of old and new technological advancement.

The multi-media installation comprising film projection, watercolours and cardboard cut-outs, charts the interwoven history of Man and machine through re-workings and pastiches of existing cultural material from our collective consciousness – from samples of early black and white cartoons to emojis, and from early kinetic experiments in film to slick advertorials.

From a smiling typewriter to the Internet of things, ‘Emotions Go to Work’ asks what balance must be struck between creating helpful technologies and entrusting machines with the freedom to reshape us in their image.

Zoe Beloff grew up in Edinburgh, Scotland where she studied painting and drawing. In 1980 she moved to New York to study at Columbia University where she received an MFA in Film. An artist and filmmaker, her projects often involve a range of media including films, drawings and archival documents organized around a theme. These include proposals for new forms of community: The Coney Island Amateur Psychoanalytic Society and its Circle 1926 – 1972 and The Days of the Commune, projects that explore relationships between labour, technology and mental states in The Infernal Dream of Mutt and Jeff, as well as the exploration of the origins of cinema from a feminist perspective in Charming Augustine and Shadowland or Light from the Other Side.

Her current work addresses the relationship between American fascism in the 1930’s and its resurgence today. These new works, Exile, the Parade of the Old New and Between Worlds, focus on the status of the refugee and the undocumented in New York City and beyond. Both thematically and formally Beloff draws timelines between past and present helping us to imagine a future against the grain of reactionary ideology. She aims to make radical art that educates, entertains, and provokes discussion. Most importantly, as her work attests, she believes protest should be vibrant, humorous and colorful, a carnival of resistance to light the way in dark times.

Beloff’s work has been featured in international exhibitions and screenings. Venues include the Whitney Museum Biennales 1997 and 2002, Site Santa Fe, the M HKA museum in Antwerp, and the Pompidou Center in Paris. She particularly enjoys working in alternative venues that are free and open to the community for events and conversations. In New York City these have included: The Coney Island Museum, Participant, Momenta and The James Gallery at the CUNY Graduate Center. She has been awarded fellowships from The Graham Foundation, the Guggenheim Foundation, The Foundation for Contemporary Arts, The Radcliffe Institute at Harvard and the New York Foundation for the Arts. She is a professor at Queens College CUNY.

Firstsite is a public contemporary art gallery situated in Colchester, making and showing great art and culture, that reflects the people, places and priorities of Colchester and Essex, to help all communities be happier and healthier together.

Firstsite's spectacular crescent-shaped building, designed by award-winning Uruguayan architect Rafael Viñoly, provides a creative and social space like no other. Over the last fifteen years it has gained a strong reputation, presenting ambitious work to new audiences in the East of England and beyond. Firstsite is a partner of Plus Tate, which uses Tate's resources to contribute to a network of arts organisations across the country, and to increase public access

Other events from Firstsite