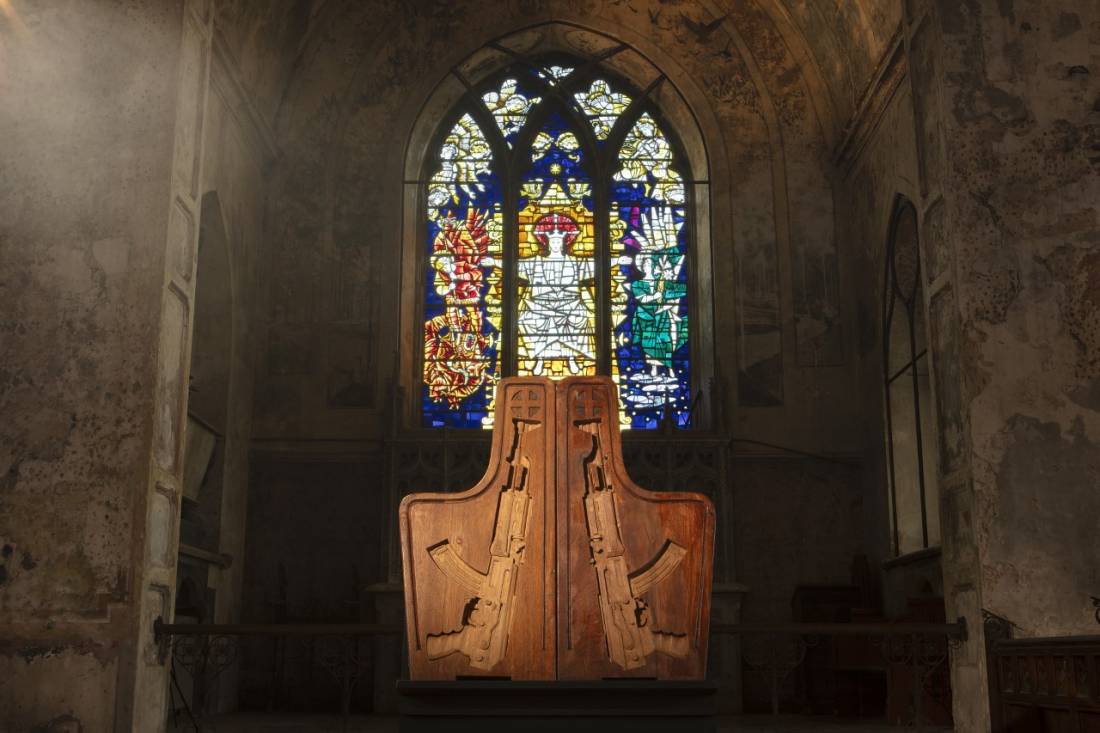 Celebrated British artist Ben Turnbull will unveil his latest body of work, twelve pieces exploring acts of violence resulting from religious influence, at The Mount Without (formerly St Michael’s on the Mount Without), Bristol, opening on 6th June 2022 in a collaboration with Bristol creative collective ART808
I Don’t Like Sundays, by the London-based artist, follows last year’s hugely well received show at the Saatchi Gallery. A cradle Catholic, and now an atheist, his pieces draw on his strict early upbringing at a Catholic school run by nuns, ‘My feeling towards religion is not, I admit, ambivalent. All but one of my friends from that time are dead, and the one that isn’t is a priest, and he was only ordained after battling drink and drug issues.’
The twelve works match the number of Jesus’ apostles. Turnbull says, ‘They [the disciples] took the word of God to the wider world, and in a sense this exhibition is my own spreading of a truth, via posters and flyers - and from a radically different perspective, of course.’
The carvings will  be arranged around the edge of the church and down the aisles, blending in with the existing ecclesiastical decorations and furniture.
Two of the guiding inspirations for these new works, which were made over a two year period beginning in 2020, are British artist Stanley Spencer’s never realised chapel which was conceived as a tribute to the women in his life, and the movie version of The Who’s 1975 rock opera, Tommy. The church scene features the band and Eric Clapton with Christ and God replaced by Marilyn Monroe iconography, in a service that is more like a bluesy bacchanal than a religious ceremony.
These new pieces reflect in style and title, Turnbull’s celebrated 2009 series, I don’t like Mondays, inspired by one of the earliest high school killing sprees which took place in San Diego, California 1979, where 16 year-old Brenda Ann Spencer slayed a number of her classmates. When asked why she did it, she told police officers it was because she didn’t like Mondays and that what she’d done had ‘livened up the day.’ She was then immortalised by The Boomtown Rats in their 1979 number one single of the same name. Turnbull’s take on this was to take school desks and carve firearms into them. The new carved works are rendered in the same way, except here he has used cast out church pews as his medium. Whilst whittling into the antique oak, he has not only carved into
his religious past, but also into the memories of his adolescence and early manhood, his friendships, his early passions for music, in particular the rave music of the early 1990s, which served as a soundtrack while he was creating the sculptures.
‘Like everyone else who hasn’t undergone extensive therapy, I have buried anything that I found too complicated to deal with, but like everyone else, you only have to scratch the surface for these things to bubble up. I see these sculptures not as a slow release, but as an exorcism, one that has been painful to perform, but which was also astonishingly liberating.’
Themes of violence are also explored in I Don’t Like Sundays. In Sunday Bloody Sunday, the title of the U2 song about the ‘Bogside Massacre’ when the British army in Northern Ireland opened fire on a demonstration killing 26 civilians, two Kalashnikov machine guns are carved into a pew with the barrels tilting towards each other with their tips just below two pre-existing Celtic crosses. Scored into the zed-shaped scrolls (or SS possibly) beneath them are the slogans, ‘Prepared for Peace’ and ‘Ready for war’, taken from a famous wall mural from around the times of the trouble.
In another work, Run Christian Run, Turnbull alludes to the terrorism, depicting two Beretta pistols below an extract taken from the Quran, ‘Soon shall we cast terror’. ‘Terror attacks have become part of our daily lives, especially if you live in London. By chance, I was on Westminster Bridge when the attack took place there in 2017 and witnessed the mass panic it caused.’
Three of Turnbull’s compositions, including the piece that gives the show its name, deploy hymn boards. One of these, Ever Get the Feeling you’ve been Cheated, were the words shouted to the crowd by John Lydon (then Johnny Rotten) at the Winterland ballroom, San Francisco, the venue of The Sex Pistols last gig. The work, When we all get to Hell, takes the hymn numbers 4,3 and 77 and turns them upside down so they read ‘hell’.
Memories from all periods of his life surfaced when he created the works, which he says he had considered five years ago but would never have had the time to consider were it not for the Covid pandemic. ‘I think the lockdown and consequent isolation had that effect on a lot of people. It afforded them the chance to look at their lives and evaluate with a cold eye what they have and what they have left behind.’
He describes the work as ‘personal, melancholic, nihilistic’, which, as he says, ‘occurs when you are mentally shut down and left alone’, He also says this  period let him to get ‘back to basics’; in terms of materials and process, deploying paper, pencil, chisel and wood.
The exhibition will be promoted a week in advance of that, with a billboard and flyposting campaign across the city in partnership with creative advertising specialists Jack Arts, and flyposting experts UNCLE.

London based Ben Turnbull (b. 1974) has, since his first exhibition at Lazarides in 2006, created a compelling body of work that draws its inspiration from American culture and politics, this culminated in 2021 with a retrospective at Saatchi Gallery, London. He is best known for his collages and carved sculptural works. Turnbull has also exhibited  at Volta New York (2012), The Lancaster Institute for Contemporary Arts (2012) as well as at the Bermondsey Project Space (2019).