BASIM MAGDY: THE STARS WERE ALIGNED FOR A CENTURY OF NEW BEGINNINGS 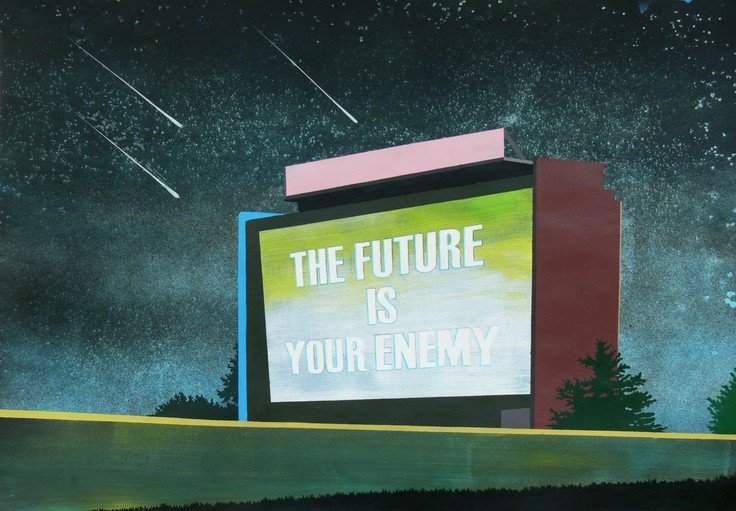 The Stars Were Aligned for a Century of New Beginnings is part of Deutsche Bank's ‘Artist of the Year’ programme and includes works on paper and in film, photography and slide projection that question the boundaries between reality, imagination and memory.

Basim Magdy’s work is rooted in dreams, scientific theory and failed utopian ambitions. Full of humour and quiet melancholy, his works reflect on the present social and political climate and our collective failure as, in the desire for progress, we repeat the same mistakes over and over again in a recurring cycle of aspiration, action and defeat.

In Basim Magdy’s recent films, there is a constant fluctuation in images, narrative and sound. These different elements are layered together like a collage; images reference reality, but combine with text to hint at new meanings. Magdy often works with experimental techniques to manipulate the analogue film that he works with, such as “pickling” film in household chemicals, or using light leaks and scratches and punched holes on the surface. The resulting colours and flickering abstractions of dots, drips and scratches layered on top of the image give a diffused sense of place, and a quality of timelessness.

“In recent years I have developed an interest in creating a language where image, text and sound don't respond to or illustrate one another too literally, where they float together in one container, sometimes meeting and other times drifting apart. In most cases there is a conclusion that doesn't offer an obvious resolution. This leaves gaps for the imagination, offering a different understanding of these elements while maintaining the work as one coherent entity.” Basim Magdy

A series brightly coloured works on paper combining acrylic, gouache, oil, spray paint and collage depict scenes that, for all their cartoon absurdity, darkly foretell a post apocalyptic vision of the future. Focusing on a period when progressive ideas of a utopian future were based on the imaginary rather than a present reality, these science fiction dreams feature strange creatures, early satellites and once visionary but now obsolete architectural structures. An Apology of a Love Story that Crashed into a Whale, 2016, is a love story told through images and text. Magdy reflects on the circulation of images and information online, and the fluid relationship between reality and virtuality in the digital age, questioning the way we archive and pass on memories in order to shape our own future.

The Stars Were Aligned for a Century of New Beginnings is remaining open for two months longer than originally planned, closing on Sunday 6 August 2017.

An offsite work, Advice for the Young and the Seekers of Sanity, 2012, will be presented on Big Screen Bristol in Millennium Square. The work will be screened at variable times throughout the day, but can also be viewed at 3pm every weekday during the exhibition period, apart from 22 to 29 May, and 6 to 12 June.

The artist would like to invite you to respond to the work through your own digital devices. Take a picture, use parody, write a love story, add filters, stickers, or digital doodles. When complete share with #dearbasim to our Twitter or Instagram feeds @arnolfiniarts.

Arnolfini and Basim Magdy would also like to invite you to write a short story, poem or text that is set in a Bristol of the future. Further information can be found here.

At 2pm each Saturday, please join us for an informal tour lead by members of Arnolfini's volunteer team. Each tour will focus on a particular theme in Basim Magdy's work, focusing on artworks throughout the exhibition.

The exhibition is part of the Deutsche Bank’s “Artist of the Year”-program and had its premiere at Deutsche Bank KunstHalle, Berlin, in 2016.

Basim Magdy is an Egyptian artist based in Basel, Switzerland. He has had major solo exhibitions in Europe and the US, and is increasingly recognised internationally. In 2016 his work was presented at Kunsthalle Deutsche Bank, Berlin, Museo nazionale delle arti del XXI secolo, Rome, Jeu de Paume, Paris, and the Museum of Contemporary Art, Chicago. Previous solo shows have been held at Art in General, New York (2014), and State of Concept, Athens (2014). His work has been featured in numerous group shows including Sharjah Biennial 13: Tamawuj (2017), Colori, Castello di Rivoli and GAM, Torino (2017), Ocean of Images: New Photography 2015, The Museum of Modern Art (MoMA), New York (2015), Surround Audience: New Museum Triennial 2015, New York (2015), The Heart is Deceitful Above All Things, HOME, Manchester, UK and Lismore Castle Arts, Ireland (2015), La Biennale de Montreal (2014) and the 13th Istanbul Biennial, Turkey (2013). He was awarded the Abraaj Art Prize, Dubai (2014), the New:Vision Award, CPH:DOX Film Festival, Copenhagen (2014) and the Experimental Award at the Curtas Vila do Conde - International Film Festival, Portugal (2015).