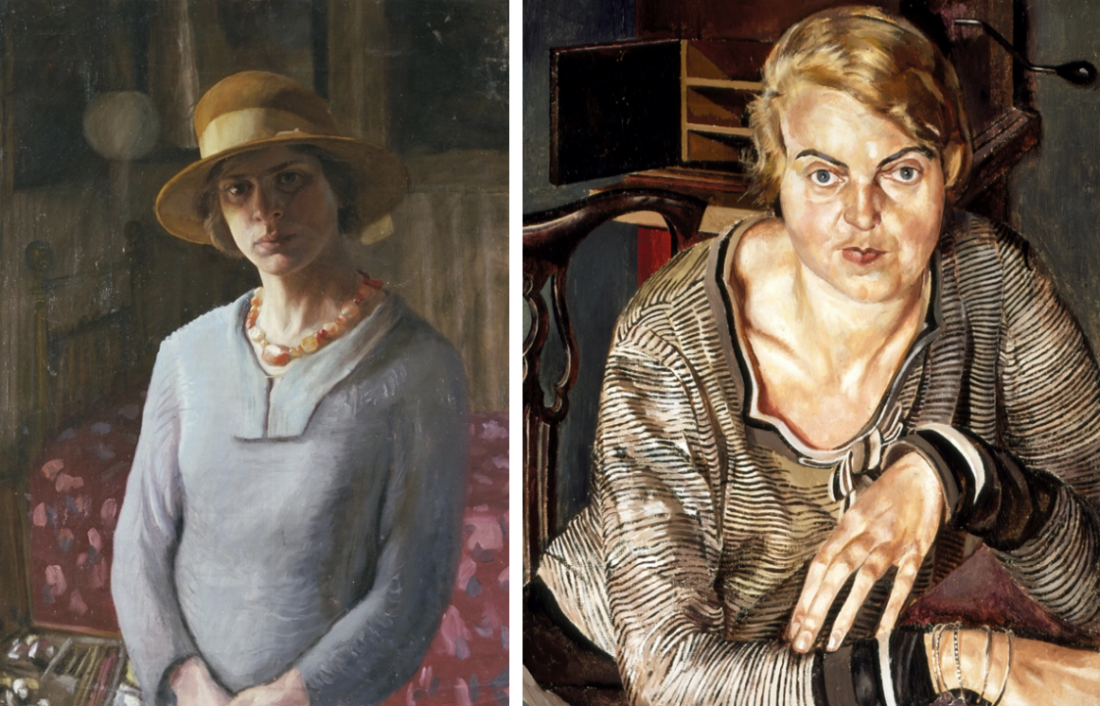 Arguably the two most important figures in Stanley Spencer’s life were his two wives, Hilda Carline and Patricia Preece, and these two relationships are examined in the Stanley Spencer’s Gallery’s Spring exhibition, LOVE, ART, LOSS: The Wives of Stanley Spencer, reopening its doors to the public on 15 August 2020.

With works drawn from the gallery’s collection, as well as two loans from the Tate, and another fromSouthhampton City Art Gallery, the show seeks to shed light on the effect the two woman had on Spencer’s artistic practice – his unflinching portraits of Preece pre-date by many decades a style adopted by Lucian Freud – while also examining the bizarre love triangle that existed between them.

Spencer was married to Carline when he met Preece in 1929 in Cookham, the Berkshire village where he was born and which was the inspiration for some of his greatest works. Eventually his infatuation led to divorce with Carline and marriage with Preece, even though she was living with her lover, the artist Dorothy Hepworth, at the time. Preece took Hepworth on their honeymoon and then refused to consummate their marriage, although she continued to live with Hepworth at Spencer’s former marital home. The artist then moved to London, living in a bedsit in Swiss Cottage, while having to support not just Carline but Preece, too.

Nevertheless, he continued to paint both women resulting in some of his most powerful work. One of his most famous paintings, Double Nude Portrait: The Artist and his Second Wife (1937), depicts his own and Preece’s body in a frank non-idealised manner, the colours and textures of their flesh are juxtaposed with a raw joint of mutton.

This new direction which led to a series of work he began in 1937 entitled The Beatitudes of Love, about ill-matched couples, did not meet with approval from all his supporters. Indeed, it prompted the following response from his early patron, Sir Edward Marsh, ‘Terrible, terrible Stanley!’

Spencer’s raw portrayal of his personal life and use of hyper-realism was unique amongst Modern British artists at this time. His unabated self-expression was truly avant-garde and his portraits in particular, evoke the conflicting forces at play: love and objectivity, lover and wife, voyeurism and the gaze, the consummated and the unfulfilled.

The works in LOVE, ART, LOSS, which include paintings and intimate studies, attest to the complicated but profound relationships he had with both women. While, Preece refused his pleas for a divorce holding out to become Lady Spencer when he was knighted the year of his death in 1959, Spencer’s deep affection for the estranged Carline resumed in the 1940s – during which both suffered from depression – particularly through their letters, which Spencer continued even after her death in 1950.

Comments the show’s curator Amanda Bradley: ‘Spencer had wanted two wives, the spiritual support from Hilda and carefree excitement from Patricia, but effectively ended up with none. Spencer’s aching sense of loss and confusion is evident in his unique evocation of the frailty of human condition that was seminal to the development of Modern British Art, without whom Lucien Freud, Francis Bacon and Grayson Perry would not be as we know them today.’

Note: There will be Covid-19 restrictions in place. Only 10 visitors will be allowed at any one time on a first come first served basis. A one way system is in place, sanitiser (provided) and face masks are obligatory, NHS Track and Trace information will be collected. Your safety and the safety of our volunteers is paramount.

Sir Stanley Spencer, CBE RA (30 June 1891 – 14 December 1959) attended the Slade School of Art, and is well known for his paintings depicting Biblical scenes occurring in Cookham, the small vil- lage beside the River Thames, as well as his large paintings for the Sandham Memorial Chapel and

the Shipbuilding on the Clyde series. Spencer’s works often express his fervent if unconventional Christian faith. This is especially evident in the scenes that he based in Cookham. Spencer’s works originally provoked great shock and controversy. Nowadays, they still seem stylistic and experimen- tal, while the nude works foreshadow some of the much later works of Lucian Freud.

About the Stanley Spencer Gallery

The Stanley Spencer Gallery is located in Cookham, Berkshire, and is dedicated to the life and work of Sir Stanley Spencer. Opened in 1962, it is housed within a former Wesleyan Chapel in the High Street, a few minutes’ walk from the house where Spencer was born and where he used to worship. The gallery’s collection comprises over 100 paintings and drawings, and these are exhibited on a regular basis at the gallery, alongside loans from other public and private collections.

On the mezzanine floor level of the gallery is a small study area which houses library and archive material and a computer presentation about the artist and his work. A comprehensive selection of books and articles on Stanley Spencer and related topics is available to be consulted on the prem- ises during opening hours.

The Gallery has won a series of accolades, including its naming as one of the five most ‘unmissable’ small Art Galleries in the UK and the award of a Michelin star in the Great Britain Michelin Green Guide 2014. The Gallery received the Queen’s Award for Voluntary Service in 2016