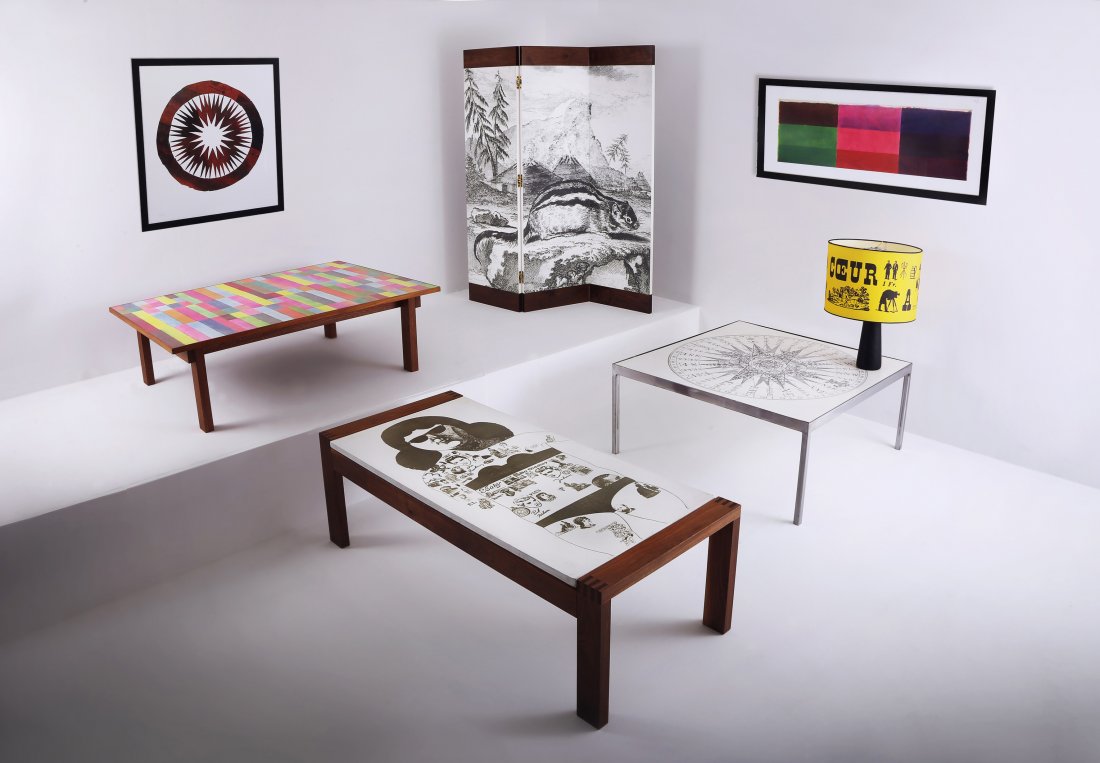 The DANAD Design exhibition, sponsored by Abet Laminati and hosted at Paul Smith No. 9 Albemarle Street, London is the first in DANAD’s 2019-20 series of events celebrating the forgotten story of a group of young artists of the pop-art era. DANAD’s members were pioneers who sought to democratise their art by applying it to furniture and other everyday surfaces.

Taking the original DANAD Design 1960 show as inspiration, this world-class exhibition will include previously unseen archival material of original paintings, prints, letters, drawings and photography from the design collective and laminated art table tops. Reproductions of original DANAD furniture will be available to buy from Paul Smith No. 9 Albemarle Street.

In 2014 a trove of artwork, hidden away in the basement of Marden Hill House in Hertfordshire came to light. Much of it unseen for over fifty years. It was the work of DANAD Design, a loose collective of artists who came together in 1958. The group lived, hung out and worked in the dilapidated splendour of this Georgian country house. Widely acknowledged as some of the originators of the Pop Art movement, these artists were buzzing with revolutionary ideas developed in Soho’s infamous Colony Room as the swinging sixties approached. Heralded as artistic pioneers, Barry Daniels and Tom Adams (who gave the collective its name) worked with Peter Blake, Robyn Denny, Bernard Cohen and Edward Wright to cross the boundaries between art and design. They made their bold new art into surface design at a time when homes were largely dull and dreary, producing furniture and wall panels using collage, print and paint techniques. The legacy of DANAD’s trailblazing work can be seen in design and media today. Marden Hill, where some of the collective’s most seminal work was created, became a cultural hub and country retreat for Soho friends. The house was a perfect party venue where artists, designers and musicians mingled with high society. In the revolutionary 1960s it was a place where many strands of vibrant popular culture merged. Mick Jagger, Jimmy Hendrix, Donovan and Rod Stewart were guests, as were Ted Hughes and Sylvia Plath, and tastemakers Ossie Clark and Terence Conran.

Mark Daniels says, “Growing up surrounded by artists, the work produced by my father and the other DANAD collaborators seemed perfectly normal. I’ve come to realise that I had witnessed an important chapter of British art and design history that's been hidden away for half a century. Paul Smith’s eclectic British style echoes the DANAD group’s spirit. The variety of antiques and curiosities available from Paul Smith No. 9 Albemarle Street makes the shop the perfect place to bring DANAD Design back to life as we celebrate the collective's 60th anniversary”.

DANAD Design was set up in 1958 by a collective formed of 6 artists who lived or hung out at Marden Hill at the time. Barry Daniels, Peter Blake, Bernard Cohen, Tom Adams, Edward Wright, Robyn Denny and architects Colin Huntley and Peter Adams. Their use of everyday objects / furniture to display their art and design is considered by many art historians to be a defining moment in Pop Art. This furniture was never mass produced and was only sold through London outlets Liberty, Heals and Harrods. DANAD Design burned brightly for a short time, helping launch the careers of some of Britain’s most respected artists. But being artists, they couldn’t run a business. And more to the point, they didn't want to.

Other events from Seen PR