A Matter of Routine 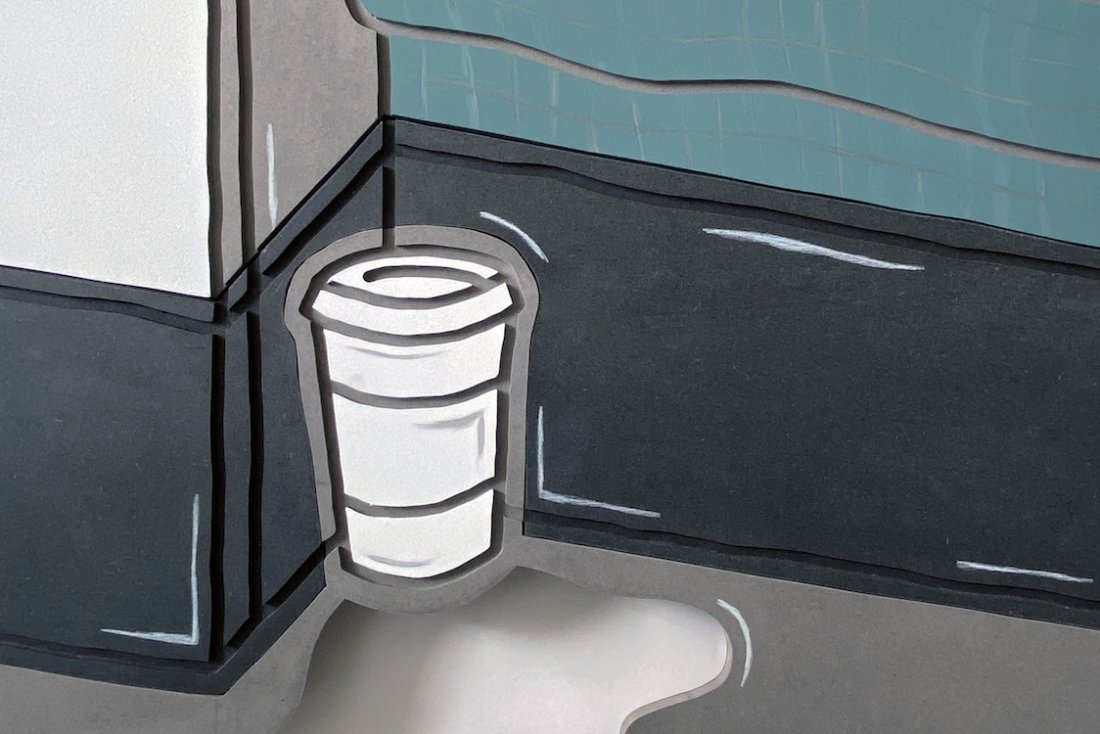 ‘A Matter of Routine’ is British artist Milly Peck’s first solo exhibition with the gallery and in Switzerland.

Working at the slip between two and three-dimensions, Peck uses a modest colour palette creating cartoonish imagery to depict slapstick yet mundane scenes, drawn from the everyday and domestic environment. For ‘A Matter of Routine’, she draws from VITRINE Basel’s location next to an old train depot, train tracks and a busy tram stop to create a new body of site-responsive work and installation.

Peck creates hybridised life-size renderings by combining various influences and representations of rail travel in both London and Basel. Manipulating and simplifying familiar features of this form of transport such as seats, handles and windows, combined with their additional, more subtle characteristics of spilled coffee cups and urban road bicycles, the sculptures and wall based works will create a scene in motion. Following Peck’s signature style, the works incorporate elements of marquetry, drawing and lighting, extending the exhibitions vitality.

As in much of Peck’s recent work, this exhibition continues to explore the language of artificial environments such as theatrical sets or museological dioramas. The imagery suggesting traces of past and future passengers on their everyday commute aboard a fictional vehicle awaiting motion. What seems a mundane, everyday activity is animated and given hidden agencies that create a sense of staged liveness similar to a theatre set.

Peck has drawn on Scott McCloud’s writing into the polyptych which, in its traditional artistic meaning, is a painting which is divided into sections, or panels. McCloud describes it as a device used in comics as a series of separate consecutive image cells, where the background remains the same, but which allows figures to pass freely from one to another.

The exhibition title is taken from an exchange of dialogue in Agatha Christie’s detective novel ‘Murder On The Orient Express’ (1934), which follows Hercule Poirot’s attempt to find the perpetrator of a murder on-board a train which is halted during a snow storm. Peck is interested in the canon of trains and rail travel within  film, literature and theatre, which has long stood as a familiar setting within multiple genres and a versatile structural device for containing and compartmentalising diverse narratives. Whilst also physically containing characters in one location, Peck believes that a train made up of multiple carriages could be seen to replicate chapters, frames or image cells from a storyboard or a comic book.

Even from the advent of cinema in the Lumière brother’s short ‘Arrival Of A Train At La Ciotat’ (1895), where a locomotive rolls into a station towards the camera famously (though speculatively) terrifying its original audience, the train has remained both a ubiquitous symbol of urban daily life and a setting loaded with  fictional potential for violence, adventure, romance or comedy. At VITRINE, the viewer will encounter Peck’s show in-the-round from the public square and as the local tram wraps around this square, interior and exterior spaces interchange and through the act of replication, our position simultaneously as both viewer and passenger comes into question.