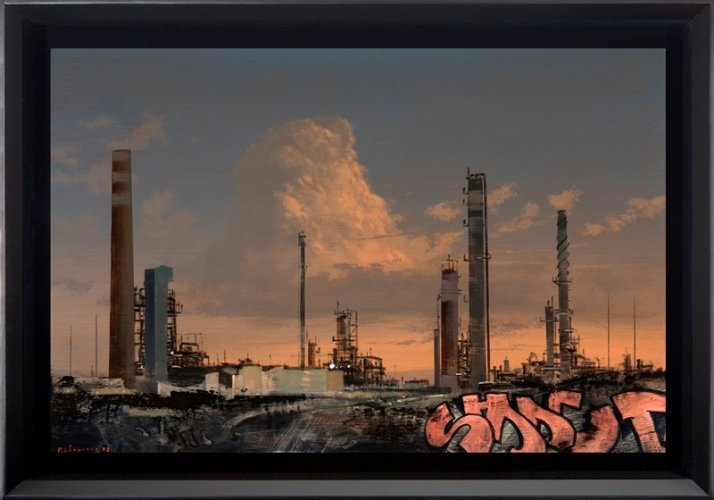 Entropy, a thermodynamic concept, can be most simply defined as a measure of disorder, used to explain transfers of energy and processes of time by registering the passage from order to disorder within a given system. Being an invisible entity, the title Views on Entropy sets up an interesting contradiction. Enclosed within this title is Lourens’ on going desire to capture the hidden and the liminal, forces out of sight, even as he faithfully records and meticulously depicts the apprehensible world in his signature photorealism. Lourens remains fundamentally concerned with the relationship between land and subject, and the degrees of separation between them. Land, memory and subjectivity remain inextricably intertwined, representing a relationship which is never without tension and unease. As his career progresses and his practice evolves, Lourens captures ever more subtleties within this relationship, this calibration of subject, landscape, sky and light. This new body of work represents an increasingly abstracted practice as well as an extension into film media and sculptural canvases. Lourens is thus able to further extend his complication and confusion of surface, while still maintaining the emotional charge and evocative stillness which has always characterised his virtuosic scenes.

With a signature style that is unique and instantly recognisable among South African painters, MJ Lourens’ brooding industrial landscapes are simultaneously familiar and surreal, intimate and overwhelming. Lourens seeks to construct and make palpable an ongoing, far stretching space of the “in between” - in between night and day, here and there, urban and suburban, presence and absence. These are landscapes of the liminal and peripheral, carrying poignant undertones of melancholy, alienation and vulnerability beneath the façade of dazzlingly rendered cityscapes and sprawling skies. An acute empathy with and sensitivity to landscape and space is made manifest in these meditative images, while Louren’s increasing use of surrealist techniques such as decalcomania signals a foray into more abstracted modes of working. In these landscapes the projection into the landscape parallels an exploration of the self, both a mapping of physical space and internal subjectivity.

Other events from Barnard Gallery