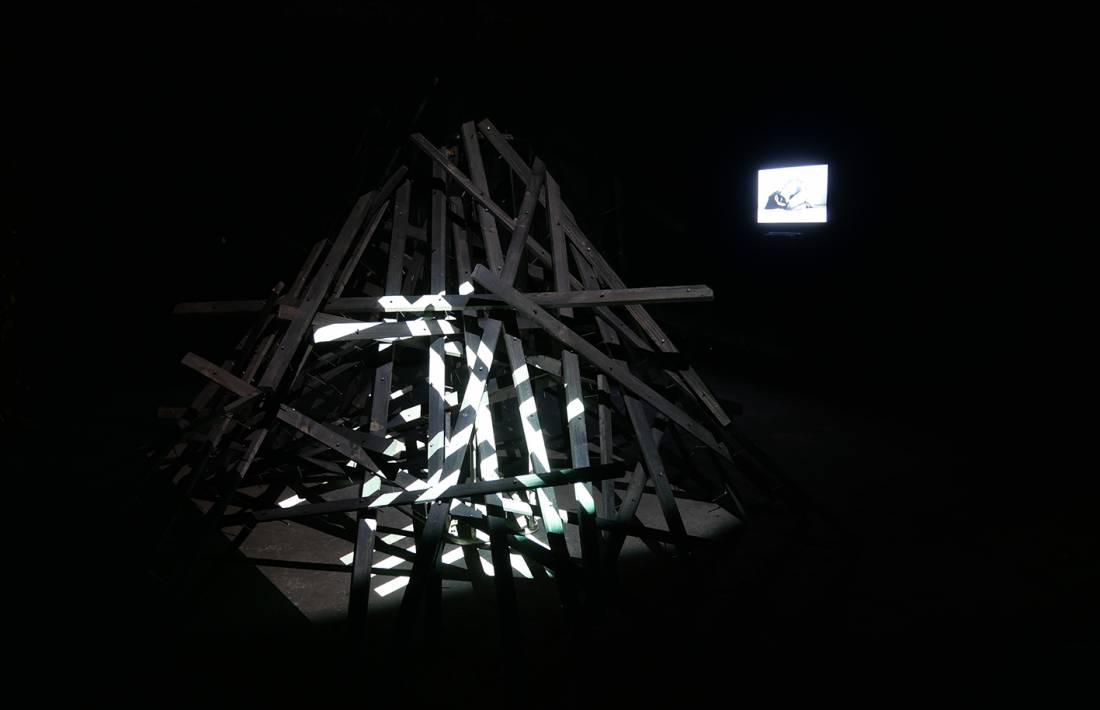 The exhibition of the environment Joyful lock in the ​​Kotolna Gallery takes on other forms of reading. The question of blocked movement created living space or "re-formation" of society's relations with the individual has its power-core in the premises of industrial construction.

The author refers to the background of the story of Franz Kafka (Der Bau, 1931). An unspecified anthropomorphic animal appears in Kafka's short story, which is feverishly building its burrow - a labyrinth - to protect it from the outside world. The creature lives in constant fear of attacking enemies, which leads it to compulsive attempts to make the burrow completely safe. On the one hand, he is interested in enlarging the burrow as much as possible so that he has enough escape possibilities, on the other hand, his inability to control all escape routes brings him even more anxiety. Shelter becomes a prison of one's own fear.

According to the author: "The parallel of the story is the current pandemic situation, which has created from everyone, a potential enemy - a carrier. Locking at home brings a fleeting sense of security that is disturbed by TV news from the outside world.”

The semantic reading of installation characters therefore has several levels. It consists of black wooden prisms, which are randomly stacked in the middle of the room to create a kind of metaphor for the building. Nails as a structural element no longer fulfil their function, but rather resemble sadomasochistic decoration and the danger of entering the interior of the building. The video projection graphically fills the contrasts of space with its psychological effect of imprisonment. The installation also includes infrasound (19Hz), which affects the viewer's feelings and causes some uncertainty and restlessness. Balúnová is authentic in the topic of "habitatis", precisely through her stays abroad, where for a long time and in several countries she researches and compares the relationship of city dwellers to urbanism, their home, country, in contrast to public and private environment. With this exhibition, he offers us a probe into a new situation and updates his artistic expressive possibilities.