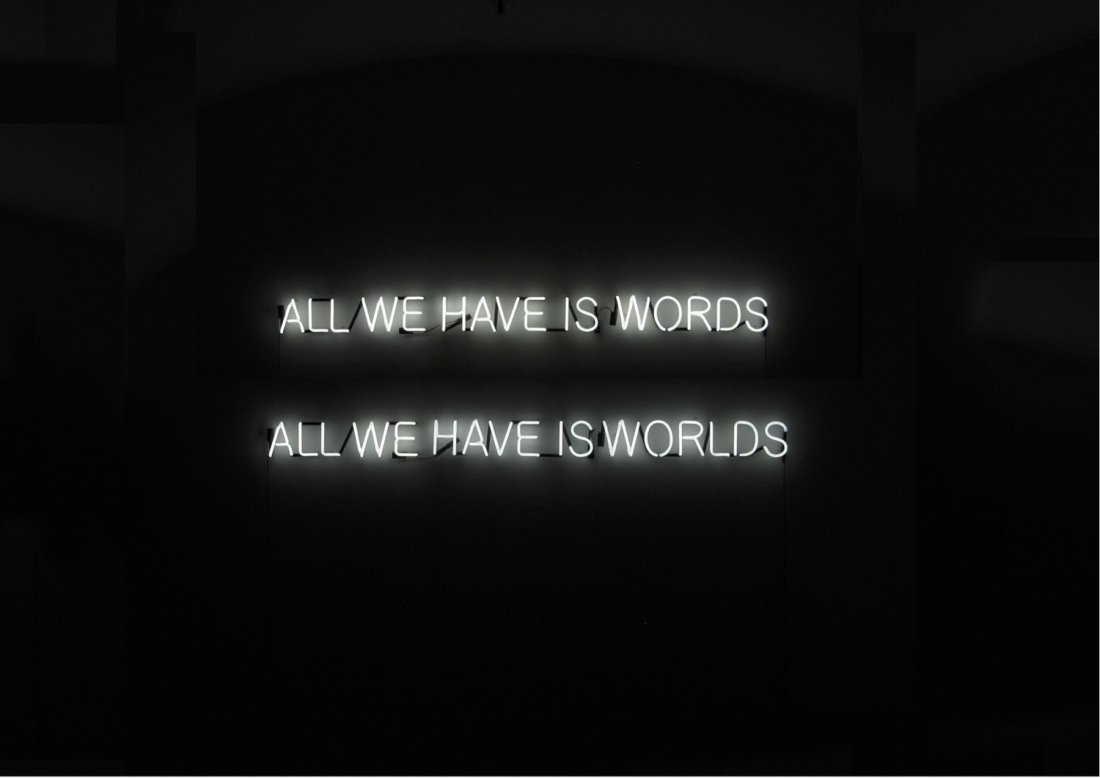 Binaries of exposure and concealment, construction and deconstruction, appearance and disappearance are explored through a framework of LCD monitors, computer screens, the stage, the space of a page, a gallery, a found site, a street, or a private space. Etchells’ interventions in these spaces and moments explore the relationship between the viewer and work in a context where systems in language and culture are interrogated for their productive or constraining effects.

Etchells will use VITRINE’s unique architecture in the round and 24-hour visibility on the public square to position new site-responsive works on the boundary between gallery and public space. It will bring together neon and LED works with a multi-channel sound installation. Whilst enclosed behind glass, the works extend beyond its boundaries into the surrounding public space. The works will be seen and heard; speaking and repeating phrases, instructions and questions to viewers and passersby. The exhibition and these new works reveal the significance of the adjoining environments on the artists’ practice and his explorations in language.

Says Etchells: “The porous, public space of VITRINE presents an amazing opportunity for experimentation and artistic creation. In a series of new works for this exhibition I am pursuing ideas of ‘speaking out’, testing fragments of language as sculptural and sound intervention in the unique public context of VITRINE Basel.”VITRINE is delighted to present Tim Etchells in Basel at the same time as his solo show at Kunstverein Braunschweig, Germany, and following numerous recent high-profile projects in 2016, including: his solo exhibition for the launch of ‘Tate Exchange’, TATE Modern; his video installation ’Eyes Looking’ on Times Square, NYC; presentations at FIAC and ARTISSIMA 2016; and touring Forced Entertainment productions as a result of receiving the prestigious Spalding Gray Award and the International Ibsen Award 2016.

Tim Etchells (b.1962 Sheffield, UK) is currently Professor of Performance and Writing at Lancaster University. He has led the performance group Forced Entertainment, based in Sheffield, since its inception in 1984. Forced Entertainment are widely considered to be one of the greatest British theatrical exports of the past 30 years, credited with producing some of the most innovative and challenging theatre of the era to great acclaim throughout the world. In 2016, Etchells was awarded the Spalding Grey Award as well as the International Ibsen Award for his work with Forced Entertainment.

VITRINE promotes a new model of exhibition-making. Exhibitions are viewable 24/7 through the glass from the public square. Internal viewing room is open by appointment, info@vitrinegallery.com.

Exhibitions are viewable 24/7 through the glass from the public square. Internal viewing room is open by appointment, info@vitrinegallery.com.