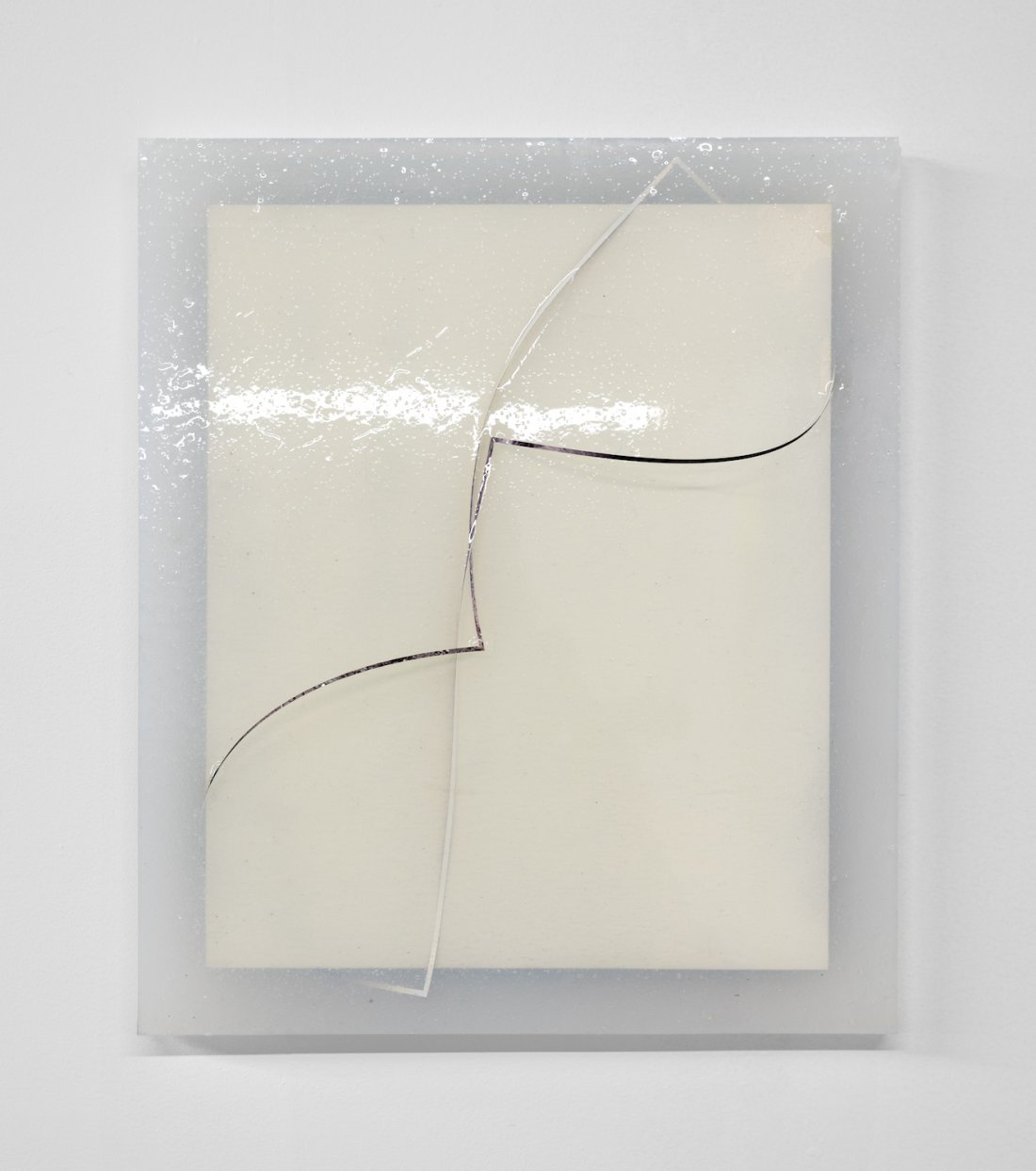 ‘Roman-fleuve’ is Charlie Godet Thomas’ first solo exhibition in Switzerland and his second with the gallery, exploring visual poetry, the bridge between language and signage, and the connections between the autobiographical, the tragic and the humorous.

In ‘Roman–fleuve’, Thomas continues to focus on the written and the importance of positive and negative space in poetry, drawing influence from a range of sources such as the constrained writing techniques of the Ouvroir de Littérature Potentielle and the written works of Édouard Levé.

‘Sunlit’ are new works from an on-going series of cast silicon wall pieces developed since 2014. These works are a means by which archived photographic images can be “reanimated”, Thomas attempts to undo the flatness of the original prints, transmogrifying them into something akin to the rhythm of words on a page. In this instance, all of the images are drawn from a set capturing the play of light on different surfaces and are titled after fragments of lines from T.S Elliot’s ‘The Wasteland’ which itself contains multiple depictions of light and dappling.

The literary notions of flow and punctuation, as well as those of positive and negative space play a central role in Thomas’ practice. These ideas are exemplified in both the aforementioned ‘Sunlit’ works, as well as the series ‘Lines Written for and by’ in which wooden dowels are held in stasis in the “pages” of the city environment. Thomas’ preoccupation with cadence extends out further through the way in which works are placed, or structures built to punctuate the space of the gallery itself.

With ‘Elegies’, Thomas explores the use of existing language and signage as a writing system for poetry. Drawing from a catalogue of available Oasis® funeral foam letters, Thomas creates two word poems comprised of the original (now absent) word, and a new second word made by removing certain letters. “MOTHER” is reduced to “_O_H__“ and “FRIEND” to “___END”. The letters are cast in concrete and wall-mounted, their missing characters lie on the floor underneath reduced to rubble. Despite the intended function of these foam letter-objects, the works have a humorous quality that contradict the macabre banality of the originals. Thomas presents us with what are perhaps the shortest tragicomedies it is possible to write.

Throughout Thomas’ practice, text can also be found in a less physical form. In audio and video works he sources and re-presents found texts, projecting the words into a space of contemplation and stillness for the listener away from the context in which they were originally situated. For ‘Roman–fleuve’, Thomas has created a sound installation which employs a sense of dismay at the way in which images, objects, living matter and language are appropriated by advertising as a means of perpetuating a false image to the consumer, viewer or visitor. Speakers stand tall in the exhibition space covered with a printed fabric mesh, seemingly as a restating of Thomas’ determination to sit on the periphery of sculpture, sound, moving image and text.

Charlie Godet Thomas (b.1985, London, UK) lives and works between London and Mexico City. Having studied a BA in Fine Art (Sculpture) at Manchester School of Art in 2009, he graduated with an MA in Fine Art (Sculpture) from the Royal College of Art, London, in 2014 where he was awarded the Bermuda Arts Council Scholarship and the Peter Leitner Scholarship. He was in residence in Fort Worth, Texas in April 2017 and at Caribbean Linked IV at Ateliers ’89 in Oranjestad, Aruba, in August 2016.

Running in advance and concurrently to ‘Roman–fleuve’, Thomas will be in residency at Atelier Mondial, Dreispitz, Basel. Elements of the work exhibited will be produced in-situ and in Basel. Further works planned during the residency include a continuing of his series ‘Short Poems’ which will be developed in public space around the city. These paper works will originate and be exhibited in the streets and can be spotted hung on lampposts or pinned to noticeboards expanding the exhibition out into the public sphere.