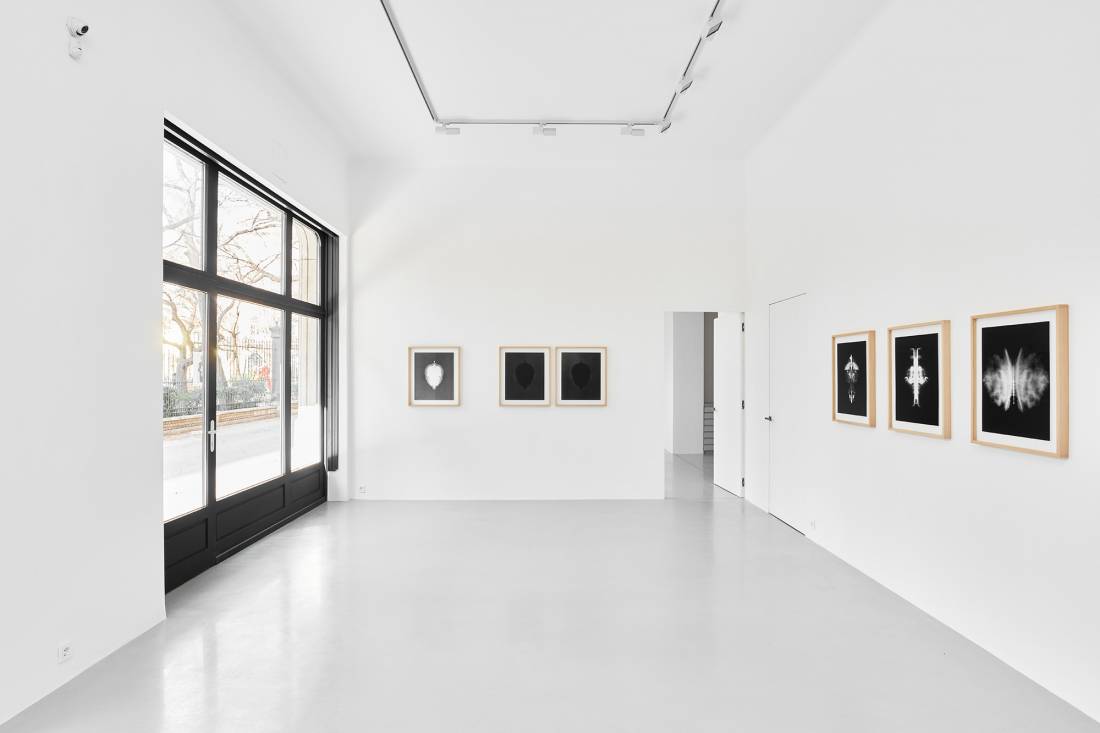 “Does it create something unitary or something dispersed? Auratic or serial? Similar or different? Identical or unidentifiable? A decision or a coincidence? A form or something unformed? The same or something different? Familiar or unfamiliar? A contact or a distance?” – asked Georges Didi-Huberman dissecting the procedure of imprinting in his book titled La Ressemblance Par Contact.1

These questions can also be raised in connection with Dezső Szabó’s series titled Copy (2021). The works exhibited in Vintage Galéria were created using the chemigram technique, as Szabó dripped developing or fixing solutions on the surface of the photo paper, then folded the paper in half, thus obtaining a symmetrical blot. Using these initial images as paper negatives, he also occasionally created contact prints.2 The works can be considered only copies in a degraded way, as the artist reduced the abstract pictorial element created in a photographic process to the level of an imprint by folding the photo paper, and the picture to the status of a copy through the self-copying and contact printing procedures. But isn’t it time to go beyond our established notions of the relationship between the original and the copy?

It is a series of statements on the status of artworks and experimentation at the same time, as the prints reproduced through contact create a unique sequence or a network of interactions between substances. To make this intertwined structure visible, through an extended examination of the materials Szabó questions everything we know so far about the chemicals used, the paper and the process, and ultimately the image itself.

The method of creating the series thus carries the complementary meaning of the French term “expérience”, as it also bears epistemological connotations beyond the physical experimentation. However, the creating process slips out of the artist’s control as the metamorphosis of the blots takes place inside the structure of the folded paper, activating the mechanisms of the “technological unconscious”. The evolution of the shapes remains inaccessible to the artist’s consciousness and associations until the paper is unfolded. Following the revelation of the shapes, visual memory comes into play, searching for similarities between the forms that has become visible and the forms preserved in memory, which metaphorically can be called engrams or imprinted memories. This situation – just as the case of the Rorschach test3 – can evoke a particular “conscious awareness” in which the viewers are cognizant of the fact that the blots have no definite meaning and are depending on interpretation.4

However, the proper perception of the works is only possible if we can trace back the principles of the creating process and think of the questions raised in a broader context. This is how we take over the working mechanism of the series: we experiment. Or as Didi-Huberman states: „It’s a refined game that we can only conceive of with a binary approach: first, with a particular look (focusing on the procedure), then looking for extended aspects (concentrating on paradigms).”5

SZABÓ Dezső (1967) visual artist. Between 1990-97, Szabó studied at the Painting Faculty of the Hungarian Academy of Fine Arts. After his initial engagement with monochrome painting, he became interested in photographic image making. During his early period, he captured scenes modelled from still photos extracted from television programmes of air and natural disasters (black box, 1999), various natural phenomena (Tornado, 2001), enigmatic locations (Spot, 2000), and deep-sea photography on his small film camera. In his series titled Time Bomb (2008), the self-destructive logic of the mock-up approach and the chosen subject matter signified an extreme endpoint in his modelling of visual scenes. In recreating the scene and the image, Szabó was already questioning the operational mechanisms of images and their contemporary status during this early period. As of 2015, he extended his activities to exploring the nature of analogue photographic images. Dezső Szabó’s works have been featured at numerous solo and group exhibitions; his latest institutional exhibition titled Darkroom was held in 2018 at the Hungarian Museum of Photography. His works can be found in the collections of the following prominent institutions, among others: Hungarian National Gallery (Budapest), Ludwig Museum – Museum of Contemporary Art (Budapest), Institute of Contemporary Art (Dunaújváros), Art Gallery Paks (Paks), Rómer Flóris Museum of Art and History (Győr), and Hungarian Museum of Photography (Kecskemét).

Other events from Vintage Galéria