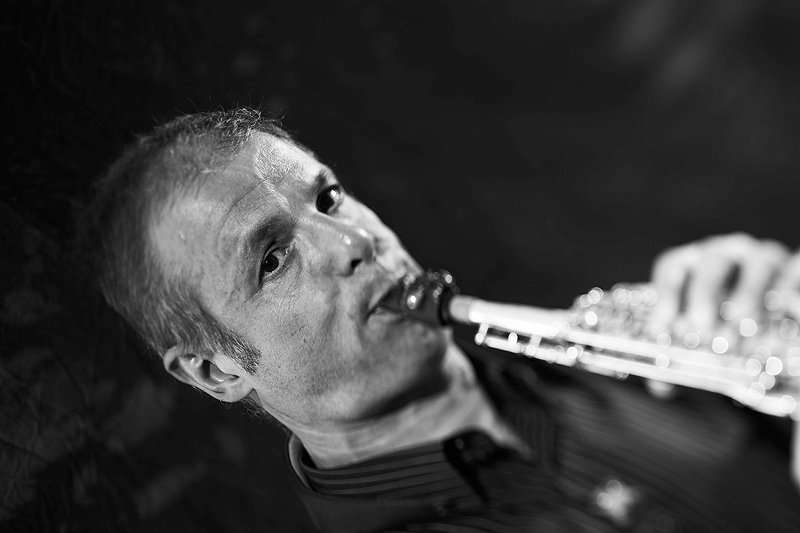 Music for Woodwinds and Computerinterface
by and with Joachim Zoepf

Since 4 years Joachim Zoepf develops in collaboration with the Berlin based Media-Artist Lars Ullrich a computer driven, in Max/Msp programmed audio interface, that enables him to use live sound or streamed sound electronicallyand to change or proceed them immediately while performing.

Joachim Zoepf was already 2016 present at DAS ESSZIMMER, then together with Alexander Frangeheim, Berlin as: Frangenheim Zoepf Duo

Joachim Zoepf – Soprano Saxophone, Bass Clarinett
Born in Düsseldorf, he started learning classical piano at the age of nine and since 1976 also saxophone. In 1979 he began his music studies, first in Wien and then in Cologne. He is active as a self-employed musician and music teacher since 1983. He has contributed to distinct jazz formations (Kölner Saxophon Mafia among others) and to formations of the Neue Musik. Since 1990 he developed his own playing style in the Improvisierte Neue Musik and collaborated with several musicians. In addition, he is involved in numerous productions and releases. Besides his artistic activity, Joachim Zoepf is active both culturally and politically, and even as an event organizer. He has collaborated with the Initiative Kölner Jazzhaus and the Initiativkreis Freie Musik in Cologne and was also founding member of the Arbeitsgemeinschaft Improvisierte Musik. In 1999 he created the label Improvisers Series as a sub-label of the NUR/NICHT/NUR-Kunst- und Musikproduktion. In 2000 he participated in the organization of the Symposium Improvisierte Musik. From 2003 to 2006 he promoted the series Leitkultur.