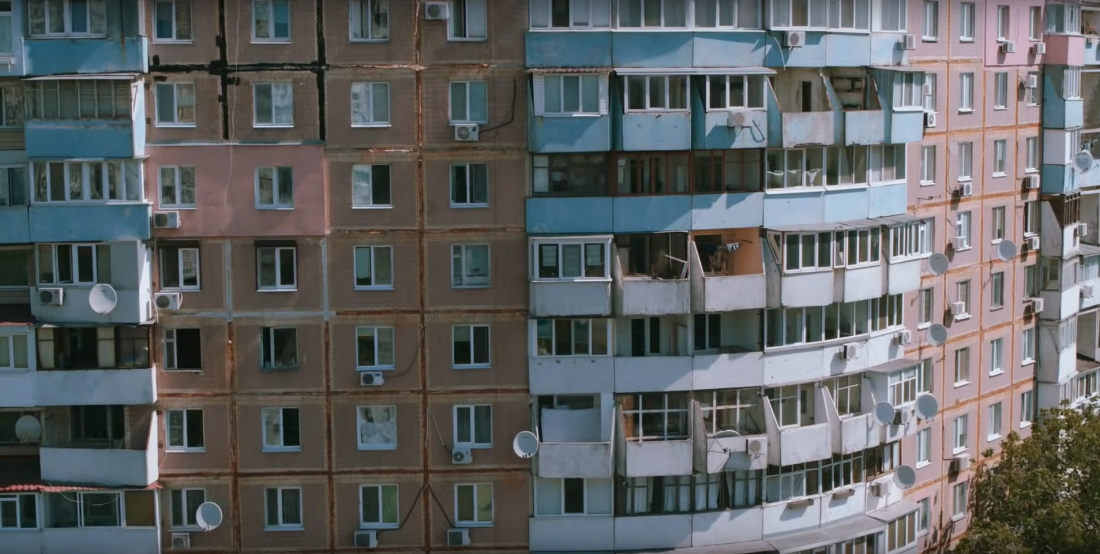 As part of our film program Ukraine mon Amour we present Short Films on Architecture and Urbanism five short films about Ukrainian architecture and urbanism.

Is it possible that a part of cityscape is a living entity? Just like a human being it has its birth and death, its life filled with events, its fate and the abandoned decline. This is the Rybalsky cable bridge. And these are its memories.

When Brovary village officially became a town, one third of its residents were communist. After 60 years and three revolutions such proportion didn’t change: thirty percent of its streets keep the names of the former empire.

Short film in support of the upcoming book Soviet Modernism. Brutalism. Post-modernism. Buildings and Projects in Ukraine 1960–1990 (Osnovy Publishing / DOM publishers). Its a wonderful representation of Kyiv’s eclectic architectural beauty. Unfortunately we might be seeing the last of some of these outstanding buildings.

It is a visual essay exploring Kyivan’s favorite summer pastime. We take a journey through popular beaches, enjoying their seductive imagery. After many months in quarantine, the film is an ode to freedom and beauty that surrounds us.

This short shows the frenzy of building religious architecture that occurred in independent Ukraine. This is encapsulated in one particular story: as a backdrop, whenever a temporary, ‘mini chapel’ has been installed on a particular site a large church is supposed to finally replace it. Father Petro (Peter) has been filing for planning permission and collecting money for the construction of the Church of St Peter and Paul for more than twenty years. Even if he doesn’t succeed in his lifetime, his son Pavlo (Paul), also a priest, will take over the work. This particular snapshot is just one of dozens of similar stories happening right now in Ukraine

Enter Through The Balcony is a Documentary Short about Ukrainian make-shift balconies. The film explores the phenomenon of the balcony as a small architectural form. Enter Through The Balcony is a journey through the decades. It is a look inside balconies and their owners in cities across Ukraine. It is a balanced and in depth view of the balconies from their owners, employees of city councils, historians, sociologists, urbanists, developers and architects. Through the history of the balconies film explores the history of Post-Soviet Ukraine — life, culture, and the relationships between personal and public space in cities.

Roman Blazhan will travel from Bavaria to join the conversation after the film screenings.