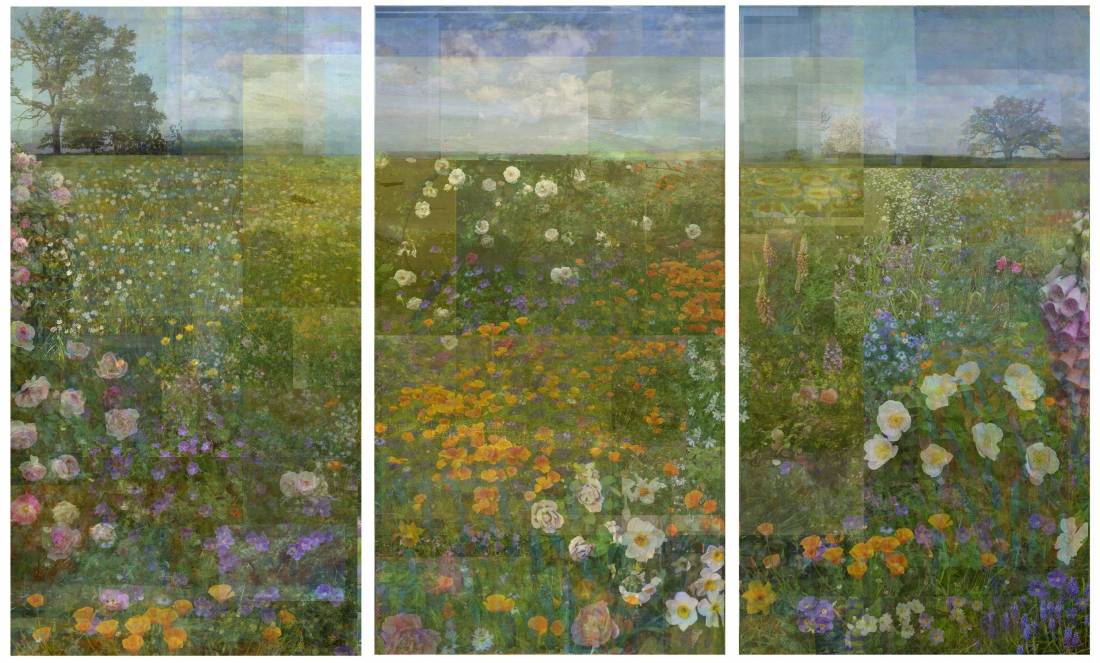 True to her unique style, reluctantly going back and forth from painting to photography, Catherine Balet brilliantly blends imaginary to reality so to tame the infinite versatility of nature over the seasons. The series “Endless”, as a true ode to life, is an invitation to embrace the ineluctable force of time.

Having moved to the countryside a few years ago, it was down by the pond next to her studio that the artist found serenity during the first lockdown in May 2020. Time had stopped and the place, with its silent beauty, became her laboratory, a source of daily and continuous wonder. Nature, both powerful and benevolent, complex and harmonious, invited her to rethink the world according to her memories of the English gardens of her childhood.

Like a botanical explorer, Catherine photographed plants and flowers, keeping a logbook of diversity and evolution as the seasons go by. From the shimmering colors of spring to the grey shades of winter, the photographer immortalized the chromatic field. With each seasonal cycle, she captured the specificity of an ever-changing light, the graphic nature of the leaves and the geometry of the branches.

From that starting point, Catherine then began her real photographic research work. In the spirit of her previous series "Moods in a Room", she superimposes the shots, plays with transparency, and creates a pictorial accumulation in the form of a digital collage, with the photos of her own paintings as a backdrop. These paintings, created for the occasion and inspired by microscope shots of nature, interpret the geometric, fragmented and abstract forms of plant cells, and the underlined brushstrokes and hand gestures contribute to the richness of the material.

The human figure is rare in Catherine Balet’s images, only represented here and there by young children or tiny silhouettes, as a detail that fits into the ecosphere, a part that fits into the whole. Through her singular style, the artist invites us to see the relationship between the Cosmos and micro-organisms, navigating from the infinitely small to the immensity of her landscapes where humans could be mere spectators but ultimately components of this Cosmos.

The series “Endless” is characterized by four very large triptychs, each representing a season, and punctuated by smaller formats symbolizing the inter-season. And because they deal with the mystery of nature, the artist has chosen to produce these large prints in a format based on the golden ratio, the "divine proportion" that governs the harmonious mathematical relationship between the parts and the whole, which is omnipresent in nature, the fruit of more than two thousand years of reflection on the links between nature and our perception of space.

A series as a reflection of Nature, both powerful and benevolent, complex and harmonious, which invites us to rethink the world.

Graduate of the Ecole des Beaux-Arts de Paris, Catherine Balet began her artistic career as a painter before moving to photography in the early 2000s.

Her photographic work then took on a sociological dimension. Her series of portraits of teenagers entitled “Identity” anchored her work in a contemporary reality. In “Strangers in the Light”, she integrated a pictorial dimension like paintings playing with chiaroscuro.

From 2013 to 2016, Catherine Balet worked on her series “Looking for the Masters in Ricardo’s Golden Shoes” in which she paid a vibrant tribute to the masters of photography featuring her friend and model, Ricardo Martinez Paz. From Nadar to contemporary trends, through Man Ray and Martin Parr, she has captured the history of photography, and looked for ways to reflect on its future.

With her series “Moods in a Room”, Catherine Balet continues her experimentation by reinvesting the technical transformations of the photographic medium and wonders about the border that separates painting from photography.

In her latest series, entitled “Endless”, Catherine Balet brilliantly blends imaginary to reality so to tame the infinite versatility of nature over the seasons. The series, as a true ode to life, is an invitation to embrace the ineluctable force of time.