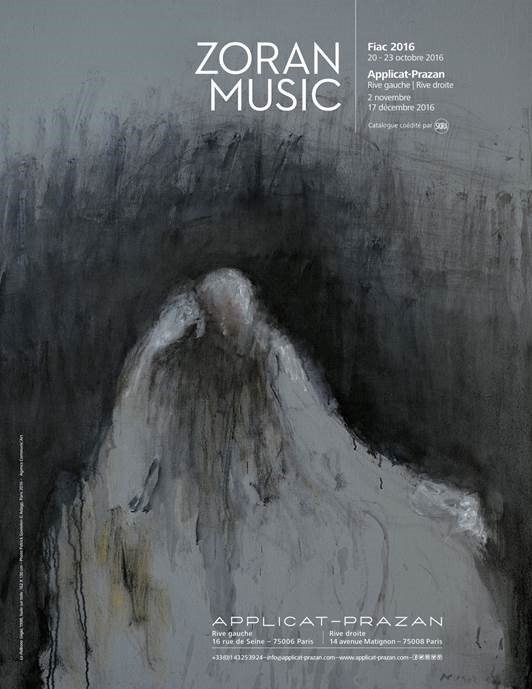 Applicat-Prazan presents the historical and eternal, monumental and timeless work of Zoran Music (1909-2005). Born in Gorizia Frioul) in 1909, Zoran Music was deported to Dachau in 1944 because he was a resistant. At the risk of his life, he drew 200 sketches which described what he saw there: scenes of hangings, crematorium ovens, piles of corpses, that is to say, the inconceivable. Many years after his return, in the 1970’s, the artist painted a series of works entitled “We are not the last” in which he depicts the horror of the camps in the silence of the unspeakable. Zoran Music died on the 25th May 2005 in Venice. His paintings are held in most of the great museums the world over.

Composed of 17 paintings, this exhibition brings to light two series of his works which fascinate the gallery. “We are not the last” consists of 10 acrylic paintings on canvas executed between 1970 and 1974, and his major later works of the 1990’s, in which he reveals his inner realm, approaching his own end.

On this occasion, Applicat-Prazan and the publisher Skira have co-edited a magnificent catalogue created  by  Communic’Art,  in  which  three  authors pay  tribute  to  the  work of Zoran  Music,  each expressing  themselves  freely  in  their  own  manner.  After  contemplating  the  paintings,  Boualem Sansal, Pascal Bruckner and Michaël Prazan have composed vibrant texts on the life and work of Zoran Music. Each, in his own style, with his personal sensitivity, has written a text addressing the themes of life, death, the monumentality of this work, human tragedy, History and the issue of the duty of remembrance. Each of the authors concludes with references to contemporary barbarity and the tragedy of current events.

Boualem Sansal, Grand Prix du Roman from the Académie Française in 2015 for 2084: La fin du monde  (Gallimard),  is  the  author  of  an  eloquent  text  entitled  Painting  or  Life  (or  The  Path  to Nothingness). This remarkable text, to be read at two levels, alludes both to the past and to the present. His vocabulary expresses a universal and timeless interpretation of life and thus, of death. Boualem  Sansal  opens  his  reflection  with  “Being  alive  is  not  living,  it  is  recalling  every  now  and then,  that  you  are  on  the  road  to  death.  Between  two  warnings—two  frights—there  is  the  all-consuming daily routine, harsh and meaningless. Then, on a cold misty night, everything comes to a halt in a dreadful silence.”  He goes on to express his perception of Zoran Music, a man he never met and whose work he has discovered through this exhibition. “Zoran Music bore witness to the magistery of death and life that, on this spot, at that time, enabled life and death to take root in the same body, like Siamese twins who share the same torso. Death exists in life and life is already death.”

In  a  Post-Scriptum  written  after  the  recent  attacks  in  Paris  and  Brussels,  the  author  adds  a statement outlining his lack of optimism in the face of fundamentalism and hate: “As I write these lines intended for people tormented by memories of the past, a strange future has begun to dawn on earth. It will certainly be hard to live through—the first reports are terrifying. And did we see the signs?”  He  concludes  on  a  resigned  and  moralizing  note  inviting  us  never  to  forget.  “It  is  right, brothers, to recall here and now what was, and what will be. That is the way humans are: they’re made of memories, only memories—we must never forget that.”

Pascal Bruckner met Zoran Music in the mid 1990’s during the war in ex-Yugoslavia. Zoran Music must  have  spoken  about  himself  and  the  origins  of  his  painting.  As  a  novelist  and  philosopher, Bruckner  has  positioned  himself  against  the  threats  of  terrorism  and  the  illusions  of  the  end  of History, since very on early in his life. On this particular occasion, he incites us to delve into this artwork,  by  observing  it  in  detail  and  by  seeking  “a  direction  among  the  shadows,”  while  also revealing, as does Boualem Sansal, the timelessness of this work and its striking resonance with our  current  era.  “With  Zoran  Music,  everything  begins  in  a  haze,  with  a  veil  that  simultaneously hides and  reveals.  His paintings strike  us first  of all  by  their  hue, the  colour  of baked  earth  that covers the entire surface. He softens our gaze the better to sharpen it—he obliges us to focus. The muted tone forces us to seek clarity, to seek a direction among the shadows.” (…)Each of Music’s paintings must  not  just  be seen but contemplated. Sepia places the content in a kind of eternal, timeless yesteryear.” He knows that Music never got over this ordeal, after which “To anyone who has been through Hell, no return is possible. The world is broken, serenity is gone.”

At the end of his contribution, Pascal Bruckner draws a parallel between this work and post-mortem photography, used in the 19 th  Century. “Music did the opposite: he set the living in the pose of the deceased, recording them just as they slide into the great serenity of nothingness. That is what the hermit of his Anchorite series is meditating: on the verge of exhaustion, he senses the fragility of life.   A  ghost  contemplates  nothingness,  preparing  for  the  grand  voyage.  Art  is  a  fragile  grace accorded over extinction.”

The  French  writer  and  film  director,  Michaël  Prazan,  is  a  passionate  enthusiast  of  History  and literature. He composes literary texts as marks or memories by means of which societies can better be  understood.  His  contribution  here  is  entitled  “Zoran  Music,  The  Art  of  Bearing  Witness”  and describes  the  principles  that  guide  the  artist:  “To  bear  witness:  Zoran  Music  was  not  the  only person to experience that urge as an absolute necessity. All inmates of concentration camps—and, more  broadly,  the  prisoners  and  forced  labourers  sent  to  the  Nazi  death  centers  who  had  the requisite  ability  and  skills—fulfilled  the  injunction  to  testify.”  Michaël’s  commitment  to  this particular  theme,  comes  from  the  history of his own  father  who, as a  child, was  hidden  with  his sister during the war, the only survivors of a family deported to Auschwitz. For Michaël, the Shoah and Auschwitz are always present in his life and inseparably associated. The works of Zoran Music have  a  resonance  with  his  personal  history  and  the  writer  points  out  a  number  of  historical
clarifications  on  this  subject.  Like  the  two  prior  authors,  he  also  evokes  the  timelessness  and eternity of this striking artwork. “He left behind a monumental, timeless oeuvre. It bears witness to the catastrophe in Europe between 1939 and 1945, and also, extending beyond the time-frame of that tragedy, to the torture of humanity in all places and periods.  Now that a new totalitarianism has emerged, now that barbarity knows no borders, when civilians are once again being tortured, massacred,  crucified,  and  decapitated,  when  Eastern  Christians  and  Yazids  in  Syria  and  Irak  are perhaps facing a new genocide, Music’s oeuvre resonates all the more powerfully. He and his fellows in misfortune, were not the last. They were an avant-garde, they were scouts on the outposts of the world’s endless havoc.”