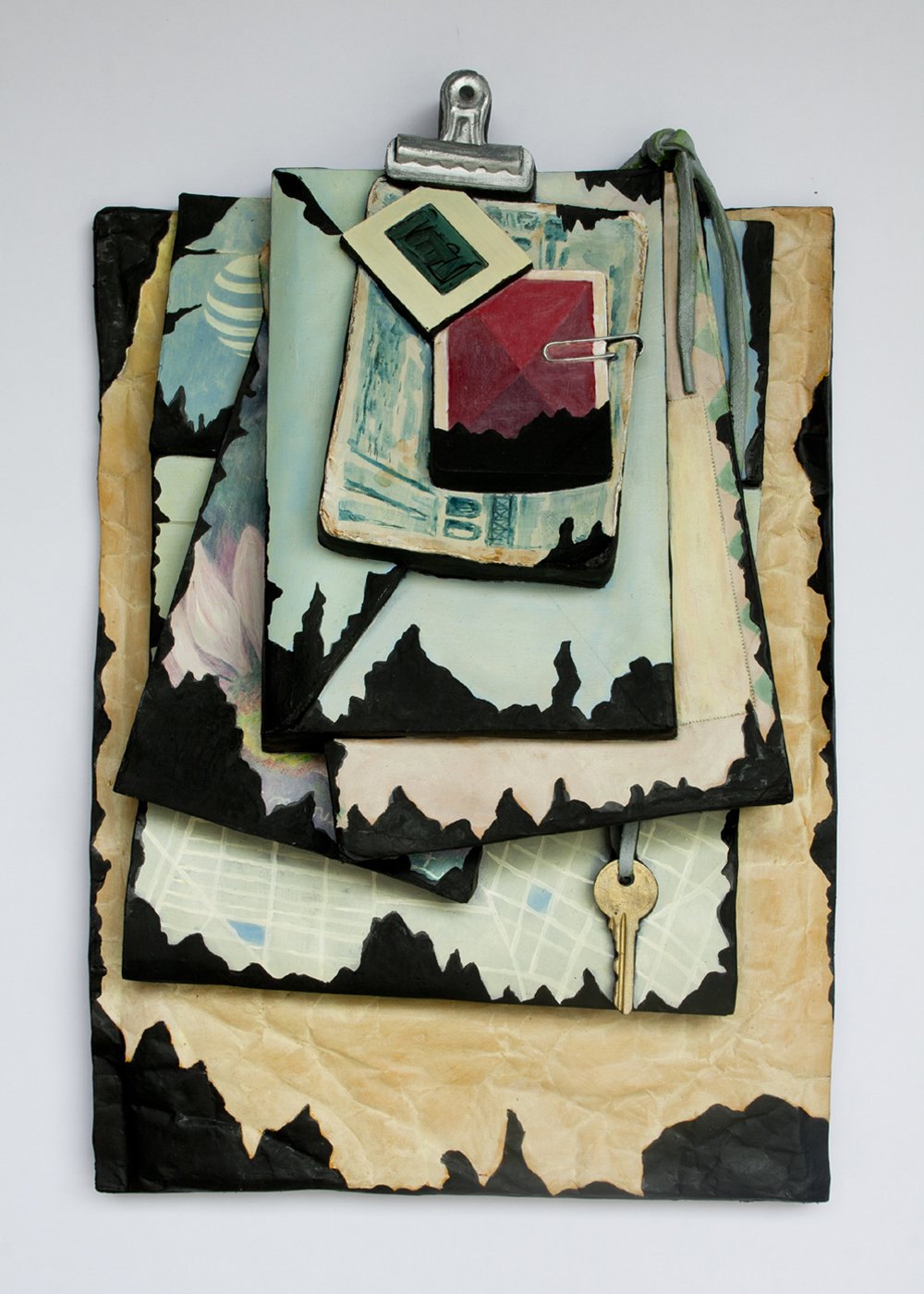 Opening on Thursday, 7 September from 6 to 8 p.m. and continuing through to 14 October, Susan Hobbs Gallery is pleased to present an exhibition of new work by Rhonda Weppler and Trevor Mahovsky.

Like ideas, we usually don’t find objects alone. Rather, we encounter them in tenuous conversation. An exchange that begins relationally—with other objects in proximity: assorted papers held together by a bulldog clip; a lamp atop a sagging table; flowers in a vase; piles of clothes on the floor. These scenarios are driven as much by randomness as intention.

The Guest’s Shadow marks Weppler and Mahovsky’s first exhibition with the gallery and presents this rhetoric of objects as sculpture. The title was found in a translation of a Matsuo Basho haiku in which it is not clear if the speaker is seeing his own shadow, that of a guest, or is simply hallucinating. Similarly, the sculptures point to the sense that our experience of the world, even of that which is close-by and familiar, can unfold in uncertain and contradictory ways. As theatrical tableaux, the sculptures often appear frozen in time or suspended mid-disintegration; they are the performers of dramatic scenes, each a hyperbole of the principle that the world is in flux. By adopting the posture of still life and trompe l’oeil techniques, the push and pull of these works follows the conflation of representational and literal states. On the one hand, through suggesting narrative scenarios, the work alludes to the ease in which we project agency onto objects; on the other, the works’ physical characteristics—which range from brutally material to delicate―assert their particular presence. There are limits to what the material can do and what it can represent. Literally, the material is what it is. Thus, these sculptures are both records of their own making and passage through the world.

Rhonda Weppler (born in Winnipeg, based in New York) and Trevor Mahovsky (born in Calgary, based in Toronto) have worked collaboratively since 2004. Both artists have MFA degrees from the University of British Columbia, where they met in 1996. Exhibits include: National Gallery of Canada (Ottawa), LABoral (Gijon), Dos de Mayo (Madrid), Aurora (Dallas), Vancouver Art Gallery, Flux Night (Atlanta), Art Gallery of Alberta (Edmonton), Contemporary Art Gallery (Vancouver), Power Plant (Toronto), Musee d’art Contemporain de Montreal, Tokyo Wonder Site, loop-raum (Berlin), 516 Arts (Albuquerque), Art Gallery of Nova Scotia (Halifax), Alter Space (San Francisco).  Weppler’s work has also been exhibited at the Palazzo delle Papesse (Siena) and COCA (Seattle).  Mahovsky has exhibited at the Queen’s Museum of Art (NY), he has written for Artforum and Canadian Art, and he contributed a text to the catalogue for Liz Magor’s survey exhibition at the MACM, Migros Museum and Hamburg Kunstverein. In 2017, Weppler is artist in residence with the MFA Art Practice at the School of Visual Arts, New York, and will undertake a project for the Community Arts Initiative, Artists Project program at the Museum of Fine Arts, Boston, MA. Weppler has also been awarded a 2018 NARS Residency in New York.  Other residencies include: Acme (London), Artspace (Sydney), apexart (New York) and ISCP (New York). Public commissions include the Watch Seller, (Main Street Skytrain station, Vancouver) and The Commuters (Saint Clair West station, Toronto). Their work is in the collection of the Musee d’art Contemporain de Montreal, The Vancouver Art Gallery, and the National Gallery of Canada. They were winners of the 2014 Glenfiddich Prize.

­Susan Hobbs Gallery is open to the public Wednesday to Saturday from 11:00 a.m. to 5:00 p.m. and by appointment.  The gallery is located at 137 Tecumseth Street, Toronto.

For further biographical information, other inquiries about this exhibition, or the Susan Hobbs Gallery, please give us a call at (416) 504.3699 or visit www.susanhobbs.com.