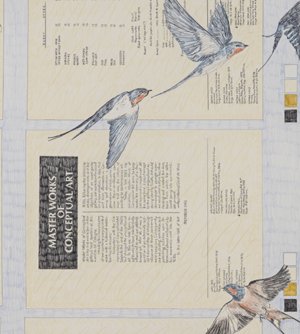 The publication of a book marks the beginning of a network of changing landscapes.  As each book moves through a sequence of places: bookshops, libraries, desks, backpacks, coffee tables and beach chairs, a network of interconnected copies is in continual motion, moving as if on a map, from reader to reader. For this exhibition of new drawings, a single copy of the catalogue “Evidence of the Avant Garde since 1957” published by Art Metropole in 1984 found its way into Sullivan’s possession. The book documents and critically reflects on the first ten years of Art Metropole's activities as an institution that supports the indexing and cataloguing of artist-made publications and distributive practices. This copy spent many years housed in the Ontario College of Art and Design University library before being discarded in 2017 and acquired shortly afterwards by Sullivan.

Sullivan's on-going drawing series utilizes the motif of the printed press sheet, depicting an early stage in book production called a signature where groups of pages are printed on both sides of a single sheet of paper. These six drawings propose a complete reprint of Art Metropole's publication. Signifiers collide and spread on the surface of the works, interrupting pages with a secondary distribution. Rainbows scatter across as if from a prism in a nearby window, ragweed makes repeating textile patterns, indiscriminate pollen induces hay fever and pocketfuls of metro tickets insidiously accumulate on the surface. The drawings are situated in an uncertain timeframe, both retrospective and in a state of becoming. The exhibition echoes a nod to both the past and future life of a publication, shifting the trajectory across a landscape yet to be revealed.